Bagnell Dam (informally, the Osage Dam) impounds the Osage River in the U.S. state of Missouri, creating the Lake of the Ozarks. The dam is located in the city of Lakeside in Miller County, near the Camden-Miller County line. The 148-foot (45 m) tall concrete gravity dam was built by the Union Electric Company (now Ameren) to generate hydroelectric power at its Osage Powerplant. It is 2,543 feet (775 m) long, including a 520-foot (160 m) long spillway and a 511-foot (156 m) long power station. The facility with eight generators has a maximum capacity of 215 megawatts.

The dam is named for the nearby town of Bagnell, Missouri, which was named for William Bagnell, who platted the town in 1883.

Construction started on the dam in 1929 and was completed in 1931. The resulting reservoir, the Lake of the Ozarks, has a surface area of 55,000 acres (22,000 ha), over 1,150 miles (1,850 km) of shoreline (1850 km), and stretches 94 miles (151 km) from end to end. At the time of construction, it was one of the largest man-made lakes in the world and the largest in the United States. Its construction virtually ended commercial traffic on the upper river. 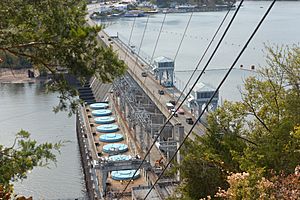 The concept of a hydro-electric power plant on the Osage River was first introduced by a Kansas City developer as early as 1912. Ralph Street managed to put together the funding to construct a dam across the Osage River. He began building roads, railroads, and the support structures necessary to begin construction of a dam that would impound a much smaller lake than what is now known as Lake of the Ozarks. Sometime in the mid-1920s, Street's funding dried up, and he had to abandon the idea of the first hydroelectric power plant on the Osage River.

Union Electric Power and Light stepped in with engineering firm Stone & Webster from Boston, Massachusetts. It designed and constructed Bagnell Dam in one of the most unlikely spots along the Osage River. |access-date=2008-05-28 |archive-url=https://web.archive.org/web/20080509072227/http://www.lakeozark.com/lakeoftheozarks.html |archive-date=2008-05-09 |url-status=dead }}</ref>

The stock market crash of 1929, which precipitated the Great Depression, occurred just months after construction began on Bagnell Dam. The project employed thousands of laborers, providing a large economic boost to the rural area around the dam and to the state as a whole at a time when jobs were scarce.

The associated Union Electric Administration Building-Lakeside was constructed in 1930. This building was added to the National Register of Historic Places in 1998, with a boundary increase of associated property in 2011.

Construction of the dam allowed for 13 floodgates, as called for in the original design. Only 12 floodgates were installed, and the thirteenth spillway opening is walled shut with concrete. The engineers calculated that 12 floodgates provided a sufficient safety margin.

All content from Kiddle encyclopedia articles (including the article images and facts) can be freely used under Attribution-ShareAlike license, unless stated otherwise. Cite this article:
Bagnell Dam Facts for Kids. Kiddle Encyclopedia.