The Baker Branch Saint John River is a 48.0-mile-long (77.2 km) river. This river is a tributary of the Saint John River (Bay of Fundy), flowing in the Maine North Woods, in Maine, in the Northeastern United States.

The Baker Branch drains a portion of the Maine North Woods utilized for 20th century pulpwood production. Spruce and Balsam Fir trees were bucked into 4-foot (1.2-meter) lengths beginning in 1917 and loaded onto sleds towed by draft animals or log haulers to the nearest river or lake. Log drives would float the pulpwood logs to a downstream paper mill when the snow and ice melted. A problem arose because pulpwood growing around the Saint John Ponds was destined for Great Northern Paper Company's Millinocket mill on the West Branch Penobscot River. The Seboomook Lake and Saint John Railroad was built in 1921 to carry pulpwood southerly from Fifth Saint John Pond to Seboomook Lake. The railroad followed the east bank of the Baker Branch between the 4th and 5th Saint John Ponds. The railroad was dismantled and converted to a truck road in the 1950s after the canal was constructed to convey floating pulpwood from Fifth Saint John Pond to the North Branch Penobscot River. 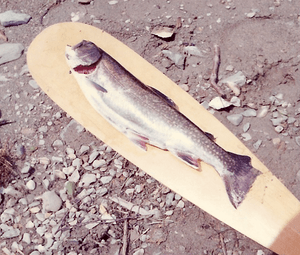 Canoe paddle with 18-inch (46 cm) brook trout caught at Baker Lake in 1959 prior to introduction of salmon and muskellunge.

Baker Lake is the largest lake on the Baker Branch. The lake was originally populated with brook trout, yellow perch, fallfish, and white sucker. The Maine Department of Inland Fisheries and Wildlife stocked the lake with land-locked Atlantic salmon in 1967, and then with rainbow smelt in 1970 as a food source for the salmon. Canadians introduced muskellunge into Lac Frontière in Quebec; and by 1986, muskellunge had entered Baker Lake by swimming down the Northwest Branch and up the Baker Branch.

Lower course of the river

From the mouth of Lac Baker, the "Baker Branch Saint John River" flows over 28.2 kilometres (17.5 mi) according to the following segments:

The confluence of the "Baker Branch Saint John River" is in the Somerset County, Maine in Maine to:

All content from Kiddle encyclopedia articles (including the article images and facts) can be freely used under Attribution-ShareAlike license, unless stated otherwise. Cite this article:
Baker Branch Saint John River Facts for Kids. Kiddle Encyclopedia.