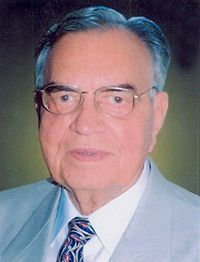 Balram Jakhar (23 August 1923 – 3 February 2016) was an Indian politician. He was a member of parliament and served as Governor of Madhya Pradesh from June 2004 to June 2009. Before being governor, Jakhar was the 8th Speaker of the Lok Sabha, serving from January 1980 to November 1989. He was born in Punjab.

Jakhar died from complications of pneumonia on 3 February 2016. He died in Delhi. He was aged 92.

All content from Kiddle encyclopedia articles (including the article images and facts) can be freely used under Attribution-ShareAlike license, unless stated otherwise. Cite this article:
Balram Jakhar Facts for Kids. Kiddle Encyclopedia.