Balsamorhiza sagittata is a North American species of flowering plant in the sunflower tribe of the aster family known by the common name arrowleaf balsamroot. It is widespread across western Canada and much of the western United States. A specimen was collected by explorer and botanist Meriwether Lewis near Lewis and Clark Pass in 1806. 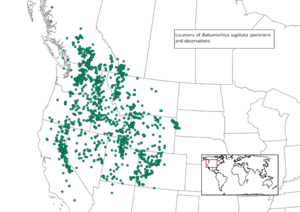 Distribution of Balsamorhiza sagittata in Canada and the United States.

The plant's native range extends from British Columbia and Alberta in the north, southward as far as northern Arizona and the Mojave Desert of California, and as far east as the Black Hills of South Dakota. It grows in many types of habitat from mountain forests to grassland to desert scrub. It is drought tolerant. 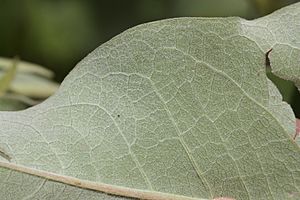 The leaves are entire and covered with fine to rough hairs, especially on the undersides.

This is a taprooted perennial herb growing a hairy, glandular stem 20 to 60 centimeters tall. The branching, barky root may extend over two meters deep into the soil. The basal leaves are generally triangular in shape and are large, approaching 50 centimeters in maximum length. Leaves farther up the stem are linear to narrowly oval in shape and smaller. The leaves have untoothed edges and are coated in fine to rough hairs, especially on the undersides.

The inflorescence bears one or more flower heads. Each head has a center of long yellowish tubular disc florets and a fringe of bright yellow ray florets, each up to 4 centimeters long. The fruit is a hairless achene about 8 millimeters long. Grazing animals find the plant palatable, especially the flowers and developing seed heads.

Elk and deer browse the leaves.

Coming into season in late spring, all of the plant can be eaten—particularly the roots (boiled) and the seeds. It can be bitter and pine-like in taste. The leaves are best collected when young and can carry a citrus flavor.

Many Native American groups, including the Nez Perce, Kootenai, Cheyenne, and Salish, utilized the plant as a food and medicine. The seeds were particularly valuable as food or used for oil. In 1806, William Clark collected a specimen near the White Salmon River, and both he and Frederick Pursh noted that the stem was eaten raw by the American natives.

Under the name Okanagan Sunflower, it is the official flower emblem of the city of Kelowna, British Columbia, Canada.

All content from Kiddle encyclopedia articles (including the article images and facts) can be freely used under Attribution-ShareAlike license, unless stated otherwise. Cite this article:
Balsamorhiza sagittata Facts for Kids. Kiddle Encyclopedia.