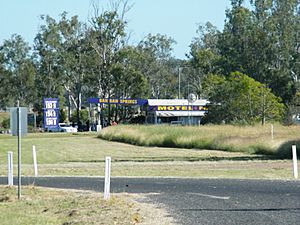 Ban Ban Springs is the formally approved and current name given by the Minister for Natural Resources on 24 September 1999 to a small community in Queensland, Australia, located at the junction of the Burnett and Isis highways.

The name Ban Ban Springs finds its source in the name originally used by H. Herbert when, in 1846, he first leased the pastoral run encompassing the springs. It is reported Herbert borrowed the words "Ban Ban" (meaning grass) from the local Wakka Wakka and/or Kabi Kabi languages.

The springs (rather than the community) are the first place in Queensland to have been formally registered as an Aboriginal cultural heritage place — being a Dreaming place of great significance to the Wakka Wakka people.

After the Queensland Department of Natural Resources and Mines sponsored a formal study to which the Wakka Wakka Jinda were a party, the high significance of the place to the Wakka Wakka people was confirmed. By 2005 the springs were entered on to the State's Aboriginal Cultural Heritage register for the following reasons:

"Ban Ban [Springs] is a sacred site and has a Dreamtime association with the Rainbow Serpent which is believed to have surfaced there. It spoke to the elders of the tribe telling them the secrets of the sacred waters and how to use it. The Rainbow Serpent also told of talks he had had with the seven sisters and of the wonders he had seen while making the pathways for the sacred water to flow in this area. (This legend is retold on a mural erected at the site by elders Mavis Hawkins, Dennis and Daniel Cobbo of the Wakka Wakka tribe and their people.)"

"It is the birth place of many elders of the Wakka Wakka people with elders of this group living in the town of Gayndah."

"Ban Ban Springs is unique in Indigenous Heritage. It is sacred in men's Business and women's Business for separate and combined reasons."

"Throughout time this area has been guarded by the Rainbow Serpent."

Unfortunately, in September 2006 the Shire of Gayndah, more concerned about noxious weeds (including Chinese elm) and improving visitors' experience of the area, sought to re-vegetate and beautify the place (e.g., planting out up to 30 or more bottlebrushes) by engaging contractors to promptly clear the existing vegetation from in and around the springs, with the following effect:

"Cultural Heritage Destroyed: They've exposed the plant life to the summer heat, moved the rocks around, driven through the springs's pond ... They've bulldozed what Gayndah's Wakka Wakka [people] know as their cultural heritage..."

By 8 May 2007 the Queensland Department of Natural Resources and Water had issued summons under the Aboriginal Cultural Heritage Act 2003 (Qld), threatening prosecution and effectively initiating discussions between the local council and the Wakka Wakka people to somehow rehabilitate the springs, better manage the Aboriginal cultural heritage area, and settle the whole matter by agreement. One year later, the council for the new North Burnett Region appointed an officer to liaise with local Wakka Wakka people about the future of the Aboriginal cultural heritage area and agreed to issue a press release formally expressing regret for the harm done.

All content from Kiddle encyclopedia articles (including the article images and facts) can be freely used under Attribution-ShareAlike license, unless stated otherwise. Cite this article:
Ban Ban Springs Facts for Kids. Kiddle Encyclopedia.