A band gap, also called a bandgap or energy gap, is an energy range in a solid where no electron states can exist. The term is used in solid-state physics and chemistry.

Band gaps can be found in insulators and semiconductors. In graphs of the electronic band structure of solids, the band gap is the energy difference (in electron volts) between the top of the valence band and the bottom of the conduction band. This is the same as the energy needed to free an outer shell electron from its orbit about the nucleus to become a mobile charge carrier. The free electron is able to move freely within the solid material. So the band gap is a major factor determining the electrical conductivity of a solid. Substances with large band gaps are generally insulators, those with smaller band gaps are semiconductors. Conductors either have very small band gaps or no band gap if the energy levels of valence and conduction bands overlap.

Scientists use the band gap to predict if a solid will conduct electricity. Most electrons (called valence electrons) are attracted to the nucleus of just one atom. But if an electron has enough energy to fly away from its nearest nucleus, it can join in the flow of electric current across the many atoms that make up the solid. The electrons that are not tightly attached to just one nucleus are called the conduction band.

In semiconductors and insulators, quantum mechanics show that electrons are only found in a number of bands of energy. Electrons are forbidden from other energy levels. The term band gap refers to the energy difference between the top of the valence band and the bottom of the conduction band. Electrons are able to jump from one band to another. However, an electron needs a certain amount of energy to jump from a valence band to a conduction band. The amount of energy needed differs with different materials. Electrons can gain enough energy to jump to the conduction band by absorbing either a phonon (heat) or a photon (light).

A semiconductor is a material with a small but nonzero band gap which behaves as an insulator at absolute zero temperature (0 K) but allows heat to excite electrons enough to jump into its conduction band at temperatures which are below its melting point. In contrast, a material with a large band gap is an insulator. In conductors, the valence and conduction bands may overlap, so they may not have a band gap.

The conductivity of intrinsic semiconductors is strongly dependent on the band gap. The only available carriers for conduction are the electrons which have enough thermal energy to be excited across the band gap.

Band gap engineering is the process of controlling or altering the band gap of a material by controlling the composition of certain semiconductor alloys, such as GaAlAs, InGaAs, and InAlAs. It is also possible to construct layered materials with alternating compositions by techniques like molecular beam epitaxy. These methods are used in the design of heterojunction bipolar transistors (HBTs), laser diodes and solar cells.

It is hard to draw a line between semiconductors and insulators. One way is to think of semiconductors as a type of insulator with a narrow band gap. Insulators with a larger band gap, usually greater than 3 eV, are not put into the semiconductor group and generally do not exhibit semiconductive behavior under practical conditions. Electron mobility also plays a role in determining a material's informal grouping as a semiconductor.

The band gap energy of semiconductors tends to decrease with increasing temperature. When temperature increases, the amplitude of atomic vibrations increase, leading to larger interatomic spacing. The interaction between the lattice phonons and the free electrons and holes will also affect the band gap a little. The relationship between band gap energy and temperature can be described by Varshni's empirical expression,

Band gaps also depend on pressure. Band gaps can be either direct or indirect, depending on the electronic band structure. 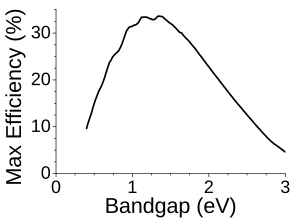 The Shockley–Queisser limit gives the maximum possible efficiency of a single junction solar cell under un-concentrated sunlight, as a function of the semiconductor bandgap. If the bandgap is too high, most daylight photons cannot be absorbed; if it is too low, then most photons have much more energy than necessary to excite electrons across the bandgap, and the rest is wasted. The semiconductors commonly used in commercial solar cells have bandgaps near the peak of this curve, for example silicon (1.1eV) or CdTe (1.5eV). The Shockley–Queisser limit can be exceeded by tandem solar cells, concentrating sunlight onto the cell, and other methods.

Electrons can be excited by light as well as by heat. The band gap determines what portion of the solar spectrum a photovoltaic cell absorbs. A luminescent solar converter uses a luminescent medium to downconvert photons with energies above the band gap to photon energies closer to the band gap of the semiconductor comprising the solar cell.

In photonics and phononics

In photonics band gaps or stop bands are ranges of photon frequencies where, if tunneling effects are neglected, no photons can be transmitted through a material. A material exhibiting this behaviour is called a "photonic crystal".

Similar physics applies to phonons in a phononic crystal.

All content from Kiddle encyclopedia articles (including the article images and facts) can be freely used under Attribution-ShareAlike license, unless stated otherwise. Cite this article:
Band gap Facts for Kids. Kiddle Encyclopedia.