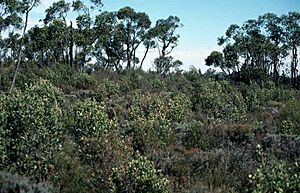 Banksia ornata, commonly known as desert banksia, is a species of shrub that is endemic to south-eastern continental Australia. The Ngarrindjeri people of the Lower Murray region in South Australia know it as yelakut. It has thin bark, serrated, narrow egg-shaped leaves with the lower end towards the base, cream-coloured flowers in a cylindrical spike, and later, up to fifty follicles in each spike, surrounded by the remains of the flowers.

Banksia ornata was first formally described in 1854 by Carl Meissner from an unpublished description by Ferdinand von Mueller. The description was published in Linnaea: ein Journal für die Botanik in ihrem ganzen Umfange, oder Beiträge zur Pflanzenkunde. The specific epithet (ornata) is from the Latin word ornatus meaning "decorated", referring to the flowers and leaves.

Desert banksia is common in western Victoria and in South Australia. In South Australia it is found in the south-east of the state south of Nuriootpa, including on the lower Eyre Peninsula, Kangaroo Island and east of Adelaide. It is confined to the far west of Victoria, mainly between Murrayville and the Grampians. It tends to grow in mallee and heathland environments in sandy, well-drained soils.

All content from Kiddle encyclopedia articles (including the article images and facts) can be freely used under Attribution-ShareAlike license, unless stated otherwise. Cite this article:
Banksia ornata Facts for Kids. Kiddle Encyclopedia.