The game would have been a commercial success; according to founder Richard Kay, Software Creations made a roughly £10,000 profit from it. Paul Tonge composed the music for the Super NES version. 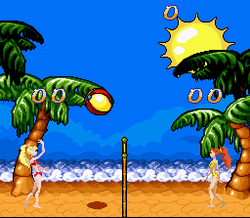 Barbie and Midge compete in the volleyball minigame.

The game is played using a side-scroller view similar to those found in most platformers.

In Wyoming, Barbie spends her time going on a camping trip. In her California home, she spends her days lounging in her apartment building. In Iowa, she goes to the local county carnival to help find an escaped pig. In Florida, she goes to the beach and plays volleyball and scuba diving. In Texas, Barbie plays with horseshoes. Barbie also has the option while enjoying the sights of Wyoming to ride on three different kinds of horses; each horse provides up to 23 frames of animation.

This game is a part of the Sega Club collection; it is designed for younger female gamers in mind. On most of her trips, she travels with her best friend Midge Hadley, who the second player controls in two-player games.

All content from Kiddle encyclopedia articles (including the article images and facts) can be freely used under Attribution-ShareAlike license, unless stated otherwise. Cite this article:
Barbie: Vacation Adventure Facts for Kids. Kiddle Encyclopedia.