Barcaldine War Memorial Clock is a heritage-listed memorial at Ash Street, Barcaldine, Barcaldine Region, Queensland, Australia. It was designed and built in 1924 by monumental masons Andrew Lang Petrie and Son. It was added to the Queensland Heritage Register on 21 October 1992.

The Barcaldine War Memorial Clock, a major regional memorial was unveiled on 21 May 1924 by the then Governor of Queensland, Sir Matthew Nathan. It was designed and executed by Andrew Lang Petrie, monumental masons of Toowong, Brisbane at a cost of £524. The marble and granite memorial honours the 292 local men who served during the First World War, including the 38 fallen.

Settlement in the area of Barcaldine began in 1886 due to the extension of the Central Western Railway. In 1891 the town was the site of one of Queensland's most significant events, the shearer's strike which caused widespread unrest and ultimately lead to the formation of the Australian Labour Party. Shortly after this, artesian water was discovered, causing an influx of people followed by a rush of development, including a brewery, meat processing plants and other new industries.

Although many different types of war memorials were erected throughout Queensland, there are few of the clock type. The form of a clock was decided upon by public ballot held in 1922 after the Barcaldine Shire Council initiated the proposal for a memorial.

This is a particularly ornate type of war memorials. Although no others have been located in Queensland, the design is described in A L Petrie's records as clock tower number two design. The monument was originally surrounded by four granite posts, however these have been removed at some stage, as has the original street light. In 1992, the monument was damaged by a storm and the clocks were replaced by Synchronome Pty Ltd.

A L Petrie and Son were the largest monumental masonry firm in Queensland at this time and produced many memorials throughout the state. 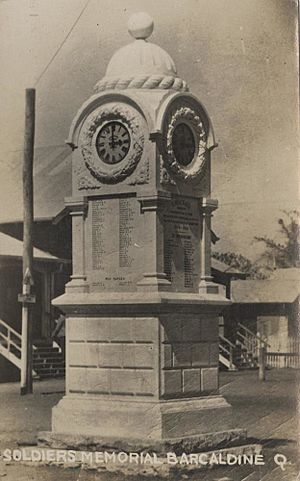 The First World War Memorial is situated in the middle of the intersection of Ash and Beech Streets, Barcaldine and is a dominant feature in the streetscape. It stands on a concrete pad with rough hewn stone posts at each corner.

The memorial stands 12 feet (3.7 m) high and comprises a base surmounted by a pedestal and clock.

The marble (probably Ulam) memorial sits on a stepped base of rough hewn granite. Above this is a smooth faced marble step capped with cyma recta mouldings and a leaded unveiling inscription on the front face. This is surmounted by a marble plinth carved to represent chamfered blocks and capped with a simple cornice.

Rising from the plinth is the pedestal comprising recessed square plates of a finer marble with engaged pillars at each corner. The recessed plates bear the leaded names of the 292 local men who served in the first World War, including the 38 fallen whose names are recorded on the front face.

The clock sits above the pedestal. There is a clock face on all four faces which are illuminated at night. Each face is surrounded by a laurel wreath and foliated carving is located in the bottom corners. A hood mould over each face creates a domed surface on which sits a large cable moulding. This is crowned by a smaller dome surmounted by a marble sphere.

The dials of the four clock faces are driven from a master clock with an electrically-driven pendulum housed in the Barcaldine Shire Hall.

Barcaldine War Memorial Clock was listed on the Queensland Heritage Register on 21 October 1992 having satisfied the following criteria.

This memorial is of particular significance as it is one of the few clock type war memorials and the only one of this style in Queensland.

Erected in 1924, the memorial at Barcaldine demonstrates the principal characteristics of a commemorative structure erected as an enduring record of a major historical event. This is achieved through the use of appropriate materials and design elements.

It is of aesthetic significance both as a dominant landmark in the streetscape and for its high level of workmanship, materials and design.

It also has special association with monumental masonry firm A L Petrie and Son as an example of their workmanship.

All content from Kiddle encyclopedia articles (including the article images and facts) can be freely used under Attribution-ShareAlike license, unless stated otherwise. Cite this article:
Barcaldine War Memorial Clock Facts for Kids. Kiddle Encyclopedia.