Barrow Island is an area and electoral ward of Barrow-in-Furness, Cumbria, England. Originally separate from the British mainland, land reclamation in the 1860s saw the northern fringes of the island connected to Central Barrow. Barrow Island is also bound to the south and east by the town's dock system and to the west by Walney Channel. The Ward population taken at the 2011 census was 2,616. 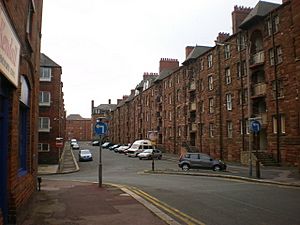 The name of the town of Barrow-in-Furness is believed to derive from the Norse word Barrae, meaning Bare Island, which actually referred to Barrow Island. Since the 1860s the island has been connected to the mainland as its channel was modified to form two docks, the Buccleuch Dock and the Devonshire Dock. The remainder of its channel has also now been developed as part of the dock system. The island is also known as 'Old Barrow'.

The Second World War defences constructed around Barrow Island have been documented by William Foot. They included a number of pillboxes to defend the docks. The principal threat was seizure of the docks by airborne troops; a seaborne landing was thought to be highly unlikely unless Ireland was occupied first.

During the late 19th century when most of Barrow Island's tenement housing was constructed the majority quickly became occupied by Scottish and Irish working class immigrants who worked at the town's shipyard, steelworks and jute mill.

Still classed as one of the Islands of Furness, Barrow Island is characterised by densely constructed tenement housing alongside huge industrial buildings. The area is home to the vast majority of Barrow's shipyard including the Devonshire Dock Hall complex - the main occupier of the reclaimed land from Walney Channel. In 2011, the wards population stood at 2,616 which although relatively small compared to Barrow's other wards equates to a higher population density, and twice that of national average. The island has become notorious for its high unemployment rate and a number of other social issues which saw it feature in a 2009 episode of The Secret Millionaire.

Barrow Island, which is nicknamed 'Baz I' locally, is served by a primary school, nursery school, two churches, several pubs, post office, pharmacy and a number of small supermarkets.

Barrow Island seen in 1890 dominated by its shipbuilding works

The island is home to Barrow Shipyard, owned now by BAE Systems. Former owners include the Barrow Iron Ship-Building Company, Vickers Shipbuilding, VSEL and Marconi Marine (VSEL), which became part of BAE in 1999. The shipyard remains one of the largest in the United Kingdom, rivalled only by that of Govan. The island also forms a major part of the Port of Barrow, owned by Associated British Ports. A large portion of the Waterfront Barrow-in-Furness is planned to be constructed on Barrow Island.

The urbanisation of Barrow Island came about entirely as a result of the booming shipyard. Today many of the existing shipyard buildings were constructed by VSEL, including the huge Heavy Engineering Workshop and Devonshire Dock Hall complex. Despite this, current owners BAE Systems have ambitious expansion plans on Barrow Island associated with the Trident successor programme.

Barrow Island itself is a Conservation Area, while many of the shipyard buildings are listed buildings - as are numerous tenement houses including the Grade II* listed Devonshire Buildings. 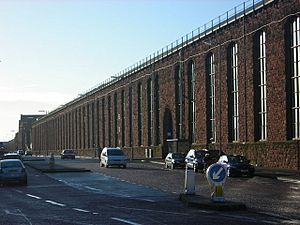 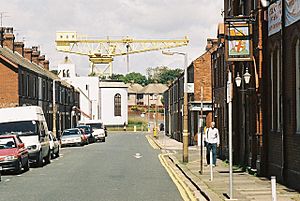 According to the 2011 census, males outnumbered females in Barrow Island to significant degree which is in contrast to the Barrow and national averages. The central and western areas of Barrow Island are within the 3% most deprived nationwide, while the more modern eastern areas are within the 20% most deprived. Deprivation is measured in Barrow Island by its high percentage of individuals with long-term illnesses, an unemployment rate almost twice as high as England's average, low levels of the overall degradation of the living environment. 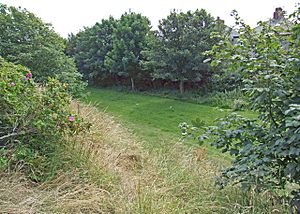 Cavendish Park, once a major railway junction on the island

The A590 trunk road runs across the northern edge of Barrow Island before crossing Walney Bridge and terminating on Walney Island. To the south of Barrow Island, Michaelson Road Bridge is another vehicle and foot bridge that crosses Buccleuch Dock into Central Barrow. Island Road is a wide tree-lined boulevard that acts as the primary artery through Barrow Island's eastern residential areas.

Historically Barrow Island was served by two railways stations, Ramsden Dock and Shipyard Junction as well as the Barrow-in-Furness Tramway. Although all evidence of the railway has gone, tramlines of the tramway are preserved across the island, most noticeably on Island Road and Michaelson Road.

All content from Kiddle encyclopedia articles (including the article images and facts) can be freely used under Attribution-ShareAlike license, unless stated otherwise. Cite this article:
Barrow Island, Barrow-in-Furness Facts for Kids. Kiddle Encyclopedia.