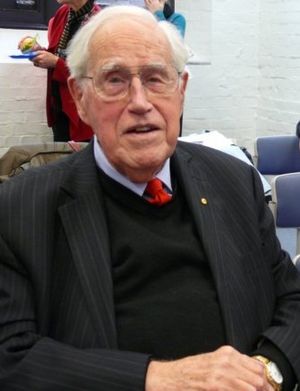 Basil Stuart Hetzel, AC (13 June 1922 – 4 February 2017) was an Australian medical researcher. He was best known for his work in the fight against iodine deficiency. The disease is a major cause of goitre and cretinism around the world. He studied and worked at the University of Adelaide.

Hetzel was born in Adelaide, South Australia. He and his first wife, Mary Helen Eyles, had five children. She died in 1980 from cancer. He later married Anne Fisher in 1983.

All content from Kiddle encyclopedia articles (including the article images and facts) can be freely used under Attribution-ShareAlike license, unless stated otherwise. Cite this article:
Basil Hetzel Facts for Kids. Kiddle Encyclopedia.