The Battle of Red Cliffs, otherwise known as the Battle of Chibi, was a decisive naval battle in the winter of AD 208–9 at the end of the Han dynasty, about twelve years prior to the beginning of the Three Kingdoms period in Chinese history.

The battle was fought between the allied forces of the southern warlords Sun Quan, Liu Bei and Liu Qi against the numerically superior forces of the northern warlord Cao Cao. Liu Bei and Sun Quan frustrated Cao Cao's effort to conquer the land south of the Yangtze River and reunite the territory of the Eastern Han dynasty.

The allied victory at Red Cliffs ensured the survival of Liu Bei and Sun Quan, gave them control of the Yangtze and provided a line of defence that was the basis for the later creation of the two southern states of Shu Han and Eastern Wu.

The battle has been called the largest naval battle in history in terms of numbers involved. Descriptions of the battle differ widely and the site of the battle is fiercely debated. Although its location remains uncertain, the majority of academic conjectures place it on the south bank of the Yangtze River, southwest of present-day Wuhan and northeast of Baqiu (present-day Yueyang, Hunan).

By 208, the Duke of Wei, Cao Cao, controlled all of the North China Plain. He completed a successful campaign against the Wuhuan in the winter of 207, thus securing his northern frontier. Almost immediately afterward, his army turned south in the autumn of 208, aiming to eliminate his main southern rivals swiftly. Meanwhile, Liu Biao, Governor of Jing province, died in that year and his successor meekly surrendered.

Liu Bei, then at garrison at Fan (modern Xiangfan), quickly fled south with a large refugee population following him. He was pursued by Cao Cao's elite cavalry, and was surrounded at the Battle of Changban. Liu further fled east to Xiakou, where he liaised with Sun Quan's emissary Lu Su. Liu's main advisor Zhuge Liang was sent down the Yangtze to negotiate a mutual front against Cao Cao with the state of Wu. Zhuge Liang's eloquence and Wu's chief commander, Zhou Yu's support finally persuaded Sun Quan, to agree on the alliance against the northerners. Sun Quan sent Zhou Yu, Cheng Pu, and Lu Su to aid Liu Bei against Cao Cao.

Meanwhile Cao Cao had captured the strategic centre and military depot of Jiangling, and harbored his massive fleet there. The combined Sun-Liu force sailed upstream to Red Cliffs, where they encountered Cao Cao's courier force. After a mild skirmish, both sides temporarily ceased activity - with Cao camped north of the Yangtze River and the allies in the south. Cao Cao boasted a troop of 150,000 men. He also had a sizable cavalry and naval division. Zhou Yu estimated Cao Cao's full troop strength to be around 220,000 — however this total included 70,000 troops from the armies of the recently defeated Liu Biao, and so the loyalty and morale of a large number of Cao Cao's force was uncertain. Zhou Yu had around 30,000 marines whilst the exiled Liu Bei managed around 20,000.

In the novel Romance of the Three Kingdoms Cao Cao boasted a much larger force of 1 million men, however his true number (in the novel) was closer to 700,000-800,000 men. 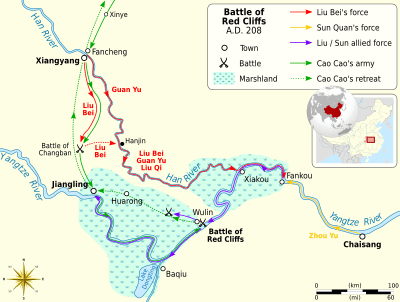 Battle of Red Cliffs, and Cao Cao's retreat (also shown: Battle of Changban). Note that the battlefield location is marked at the site near Chibi City; see Location of Red Cliffs.

A crossbow with inscriptions unearthed at Chibi Town 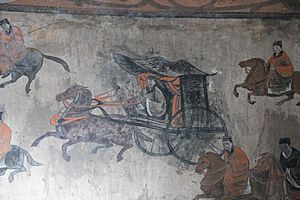 The Battle of Red Cliffs unfolded in three stages: an initial skirmish at Red Cliffs followed by a retreat to the Wulin (烏林) battlefields on the northwestern bank of the Yangtze, a decisive naval engagement, and Cao Cao's disastrous retreat along Huarong Road.

The combined Sun-Liu force sailed upstream from either Xiakou or Fankou to Red Cliffs, where they encountered Cao Cao's vanguard force. Plagued by disease and low morale due to the series of forced marches they had undertaken on the prolonged southern campaign (de Crespigny 2003), Cao Cao's men could not gain an advantage in the small skirmish which ensued, so Cao Cao retreated to Wulin (north of the Yangtze River) and the allies pulled back to the south (de Crespigny 1990, p. 257).

Cao Cao had chained his ships from stem to stern, possibly aiming to reduce seasickness in his navy, which was composed mostly of northerners who were not used to living on ships. Observing this, divisional commander Huang Gai sent Cao Cao a letter feigning surrender and prepared a squadron of capital ships described as mengchong doujian (蒙衝鬥艦). The ships had been converted into fire ships by filling them with bundles of kindling, dry reeds, and fatty oil. As Huang Gai's "defecting" squadron approached the midpoint of the river, the sailors applied fire to the ships before taking to small boats. The unmanned fire ships, carried by the southeastern wind, sped towards Cao Cao's fleet and set it ablaze. A large number of men and horses either burned to death or drowned (Chen c. 280, pp. 54, 1262–63).

Following the initial shock, Zhou Yu and the allies led a lightly armed force to capitalise on the assault. The northern army was thrown into confusion and was utterly defeated. Seeing the situation was hopeless, Cao Cao then issued a general order of retreat and destroyed a number of his remaining ships before withdrawing (Chen c. 280).

Cao Cao's army attempted a retreat along Huarong Road, including a long stretch passing through marshlands north of Dongting Lake. Heavy rains had made the road so treacherous that many of the sick soldiers had to carry bundles of grass on their backs and use them to fill the road to allow the horsemen to cross. Many of these soldiers drowned in the mud or were trampled to death in the effort. The allies, led by Zhou Yu and Liu Bei, gave chase over land and water until they reached Nan Commandery; combined with famine and disease, this decimated Cao Cao's remaining forces. Cao Cao then retreated north to his home base of Ye, leaving Cao Ren and Xu Huang to guard Jiangling, Yue Jin stationed in Xiangyang, and Man Chong in Dangyang (Chen c. 280).

The allied counterattack might have vanquished Cao Cao and his forces entirely. However, the crossing of the Yangtze River dissolved into chaos as the allied armies converged on the riverbank and fought over the limited number of ferries. To restore order, a detachment led by Sun Quan's general Gan Ning established a bridgehead in Yiling to the north, and only a staunch rearguard action by Cao Ren prevented further catastrophe. 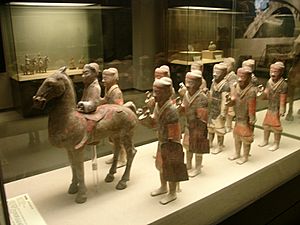 By the end of 209, the post Cao Cao had established at Jiangling fell to Zhou Yu. The borders of the land under Cao Cao's control contracted about 160 kilometres (99 mi), to the area around Xiangyang.

Liu Bei gained territory by taking over the four commanderies (Wuling, Changsha, Lingling and Guiyang) south of the Yangtze River. Sun Quan's troops had suffered far greater casualties than Liu Bei's in the extended conflict against Cao Ren following the Battle of Red Cliffs and the death of Zhou Yu in 210 resulted in a drastic weakening of Sun Quan's strength in Jing Province. Liu Bei also occupied Jing Province that Cao Cao had recently lost—a strategic and naturally fortified area on the Yangtze River that Sun Quan claimed for himself.

The control of Jing Province provided Liu Bei with virtually unlimited access to the passage into Yi Province and important waterways into Wu (southeastern China) and dominion of the southern Yangtze River. Never again would Cao Cao command so large a fleet as he had at Jiangling, nor would a similar opportunity to destroy his southern rivals present itself again.

All content from Kiddle encyclopedia articles (including the article images and facts) can be freely used under Attribution-ShareAlike license, unless stated otherwise. Cite this article:
Battle of Red Cliffs Facts for Kids. Kiddle Encyclopedia.