Baxley is a city in Appling County, Georgia, United States. As of the 2010 census, the city had a population of 4,400. The city is the county seat of Appling County. 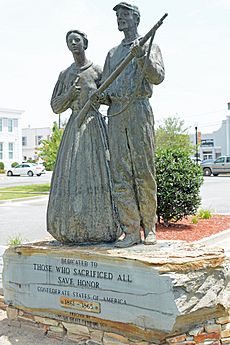 Baxley was mentioned in Charlie Daniels' Open Letter to the Hollywood Bunch. It stated "Go down to Baxley, Georgia and hold an anti-war rally and see what the folks down there think about you."

The Edwin I. Hatch Nuclear Power Plant is located north of the city along U.S. Route 1, on the banks of the Altamaha River. It is the area's largest employer.

Appling County students in K-12 grades are in the Appling County School District, which consists of four elementary schools (three include pre-school), a middle school and a high school. The district has 210 full-time teachers and over 3,303 students.

All content from Kiddle encyclopedia articles (including the article images and facts) can be freely used under Attribution-ShareAlike license, unless stated otherwise. Cite this article:
Baxley, Georgia Facts for Kids. Kiddle Encyclopedia.