Fragaria chiloensis, the beach strawberry, Chilean strawberry, or coastal strawberry, is one of two species of wild strawberry that were hybridized to create the modern garden strawberry (F. × ananassa). It is noted for its large berries. Its natural range is the Pacific Ocean coasts of North and South America, and also Hawaii. Migratory birds are thought to have dispersed F. chiloensis from the Pacific coast of North America to the mountains of Hawaii, Chile, and Argentina. 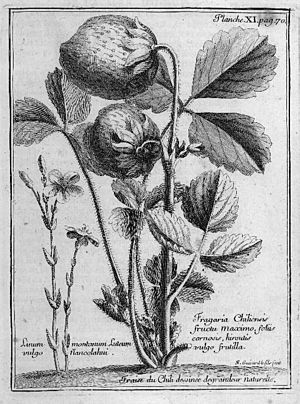 It is an evergreen plant growing to 15–30 centimetres (5.9–11.8 in) tall, with glossy green trifoliate leaves, each leaflet around 5 centimetres (2.0 in) long. The flowers are white, produced in spring and early summer. The fruit is edible, red on the surface, white inside.

Its fruit is still sold as a local delicacy in some South American produce markets.

Amédée-François Frézier (1682–1773) was the first to bring back specimens of Fragaria chiloensis to the Old World.

Chaetosiphon fragaefolii, the strawberry aphid, is a bug species found feed on F. chiloensis in Chile. It is a vector of the strawberry mild yellow-edge virus.

There are a number of subspecies and forms:

All strawberries have a base haploid count of 7 chromosomes. Fragaria chiloensis is octoploid, having eight sets of these chromosomes for a total of 56. These eight genomes pair as four distinct sets, of two different types, with little or no pairing between sets. The genome composition of the octoploid strawberry species has generally been indicated as AAA'A'BBB'B'. The A-type genomes were likely contributed by diploid ancestors related to Fragaria vesca or similar species, while the B-type genomes seem to descend from a close relative of Fragaria iinumae. The exact process of hybridization and speciation which resulted in the octoploid species is still unknown, but it appears that the genome compositions of both Fragaria chiloensis and Fragaria virginiana (and by extension the cultivated octoploid strawberry as well) are identical.

All content from Kiddle encyclopedia articles (including the article images and facts) can be freely used under Attribution-ShareAlike license, unless stated otherwise. Cite this article:
Beach strawberry Facts for Kids. Kiddle Encyclopedia.