Bead Hill is an archaeological site comprising the only known remaining and intact 17th-century Seneca site in Canada. It is located along the Toronto Carrying-Place Trail on the banks of the Rouge River in Rouge Park, a city park in Toronto, Ontario. Because of its sensitive archaeological nature, it is not open to the public, nor readily identified in the park. It was designated a National Historic Site of Canada in 1991.

The Bead Hill site is believed to be one of seven villages established along the north shore of Lake Ontario by the Iroquois in the 1660s. The Bead Hill site was settled temporarily as part of a mid 17th century push by the Iroquois Confederacy north, from their traditional homeland in New York state. The Huron Wendat Confederacy, had once occupied the north shores of Lake Ontario but had moved north toward Georgian Bay and Lake Simcoe at the end of the 16th century.

Following extensive excavation undertaken in the 1980s it was determined that the Bead Hill site could be the historically documented village of Ganatsekwyagon. Evidence from test excavations suggests that it was home to about 500 to 800 people for about 22 years (1665-1687). Bead Hill was primarily a fur trading outlet, not a military or agricultural site. It was located at the nexus of major trade and transportation routes, including the lakeshore trail that follows modern-day Kingston Road and the historic Toronto Carrying-Place Trail.

Bead Hill is adjacent to Glen Rouge Park and Campgrounds. 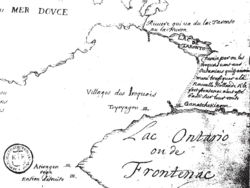 The Bead Hill site is believed to contain the archaeological remains of the village of Ganatsekwyagon. French missionaries and explorers arrived at Ganatsekwyagon in 1669. François de Salignac de la Mothe-Fénelon passed the winter of 1669 in the village, which was the first recorded residence of Europeans in the neighbourhood of Toronto. François-Saturnin Lascaris d'Urfé may have also spent the winter of 1669 in Ganatsekwyagon with Abbé Fénelon but the records are unclear.

The village was an important fur trading post and was part of the regional power struggle between the French, British, and Iroquois. The Comte de Frontenac wrote to Louis XIV of France in the fall of 1674 that the Iroquois "have given their word not to continue the trade, which as I informed you last year, they had commenced to establish at Ganatsekwyagon, with the Ottawas, which would have absolutely ruined ours by the transfer of the furs to the Dutch."

Tensions between the Iroquois and French led to a number of conflicts over the course of the 17th century which are collectively known as the Beaver Wars, which would gravely affect Ganatsekwyagon. In 1687, the French, led by the Marquis de Denonville, began a campaign against the Senecas in northwest New York state. Denonville destroyed most of the Seneca villages in New York. It is unclear whether the French also destroyed Ganatsekwyagon and other Iroquois villages on the North Shore of Lake Ontario in his 1687 campaign, or if the villages were abandoned as the Iroquois on the north shore of Lake Ontario retreated to New York state. Iroquois villages were usually temporary and tended to shift to a new location every 10–20 years. Therefore, it is not unusual that villages were abandoned. Regardless of the exact reason, following the 1687 campaign the Iroquois were restricted to south of Lake Ontario and Ganatsekwyagon was abandoned.

William Brown, who was renting a saw mill on the Rouge River, was one of the first individuals to describe Bead Hill in 1849. After his employees found the site and he inspected it, he wrote,

"There were pieces of broken pottery, broken guns, and flint heads of some very handsome tobacco pipes which the men brought away. They intended to go again ... But I persuaded them to allow the dead to rest in peace, going, however, to view the place myself; and I found that about 40 acres had been appropriated as a place of sepulture, and that no grave had been deeper than about two feet from the surface. The whole of the steep bank of the river had been used, and the graves being one above another in the hillside, they looked like steps from the top to the bottom."

In 1885, C. Blackett Robinson published A History of Toronto and County of York, which described artifacts found "near the mouth of the Rouge River, where the site of what was once a considerable Indian village was indicated by the remains of the logs which formed a wooden palisade surrounding their habitations." Some of these artifacts, the account continued, "have all the characteristics of the stone age, and mixed with the rude weapons and implements of 'native industry' are those of copper and iron, and also glass beads, which were probably obtained by intercourse with the early French voyageurs and traders ... A few yards from the site of the village a number of graves containing aboriginal remains were discovered."

Iroquois villages on the north shore of Lake Ontario

By the late 1660s various Five Nation Iroquois had established seven villages along the shores of Lake Ontario where trails led off into the interior. In addition to Ganatsekwyagon at the mouth of the Rouge River, the following settlements have been identified by historian Percy James Robinson:

All content from Kiddle encyclopedia articles (including the article images and facts) can be freely used under Attribution-ShareAlike license, unless stated otherwise. Cite this article:
Bead Hill Facts for Kids. Kiddle Encyclopedia.