The Bee Cliff is a prominent northeast Tennessee geological limestone feature with high caves that overlooks the Watauga River and the Siam community of Carter County, Tennessee. 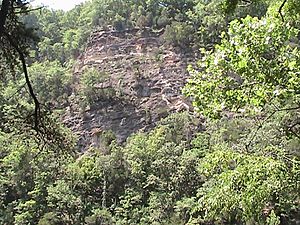 An upper section of the Bee Cliff approximately 100 meters above and adjacent to the Watauga River.

The lower face of the Bee Cliff is across and immediately above the Watauga River from Wilbur Dam Road.

The summit of the Bee Cliff is located off Blue Springs Road across the Watauga River from theWilbur Dam Road .

By travel afloat on the Watauga River, the Bee Cliff is located approximately 10 to 15 minutes downstream from the Tennessee Valley Authority Wilbur and Watauga dams and approximately one hour and forty-five minutes upstream of the city of Elizabethton, Tennessee.

Whitewater rafting guides and paddlers make their way down the ramp to the TVA Wilbur Dam (background) put-in.

For whitewater rafting and kayaking on the Watauga River, the most popular Carter County "put-in" for whitewater rafting is found immediately downstream of the Wilbur Dam and the most popular "take-out" is found approximately 2 to 2½ hours downstream (depending upon the volume of the reservoir release and other factors) at the Blackbottom riverside portion of the linear trail in Elizabethton. While floating downstream "straight shot" on the Watauga River, you can reference several local landmarks in order to estimate your length of time and distance on the river to Elizabethton:

The distance afloat from the put-in at Wilbur Dam to the Blackbottom take-out is approximately seven miles (11 km).

Difficulty of the rapids

Upstream image of a guide in the Bee Cliff Rapids sliding his raft sideways into The Big Hole.

The classification of these rapids by the International Scale of River Difficulty at the Bee Cliff are largely dependent upon the scheduled release of impounded reservoir water from behind the Tennessee Valley Authority Wilbur and Watauga Dams. TVA runs a summer release schedule that frequently provides for what local river guides refer to as being a "full load", meaning that the Bee Cliff Rapids can approach Class II and Class III (especially when the TVA is also releasing water over the Wilbur Dam spillways).

There are several minor water hazards at the Bee Cliff Rapids that paddlers should keep in mind:

Whitewater rafting, kayaking, canoeing, fly fishing, and angling with fishing reels are all popular recreation activities pursued at the Bee Cliff. Rainbow trout, brown trout, and striped bass are all caught in the Watauga River. 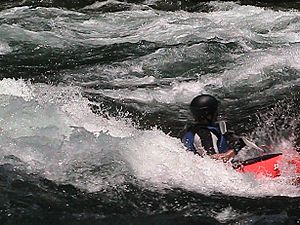 Kayaker at the Bee Cliff Rapids paddling inside "The Big Hole".

The Watauga River downstream of the TVA dams draws commercial rafting outfitters from both northeast Tennessee and western North Carolina during the summer months and commercial fishing guides throughout the year.The picturesque Class II+ Bee Cliff Rapids on the Watauga River (also referred to the "Anaconda Rapids" by some North Carolina-based rafting companies) are found downstream between Wilbur Dam and the Siam Bridge, southeast of Elizabethton, Tennessee.

For commercial whitewater rafting and kayaking on the Watauga River, the most popular Carter County "put-in" for is immediately downstream of the TVA Wilbur Dam, and the most popular "take-out" is 2 to 2½ hours downstream (depending upon the volume of the reservoir release and other factors) at the Blackbottom riverside portion of the city linear trail park in Elizabethton. 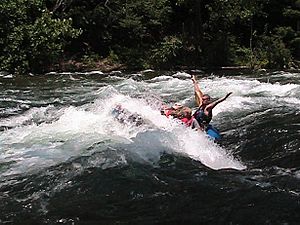 The distance afloat for paddlers from the put-in at Wilbur Dam to the Blackbottom take-out is approximately seven miles with landmarks along the Watauga River providing good estimate of time and distance traveled.

The Watauga also has a section of Class IV-V whitewater popular with expert kayakers, upstream of Watauga Lake. This section requires significant rainfall to bring it up to runnable levels. It features continuous steep boulder bed rapids dropping up to 150 feet per mile (28 m/km), and several falls and ledges only runnable by expert paddlers.

The Tennessee Valley Authority (TVA) regulates flow of the Watauga River by scheduling the release of deep, impounded reservoir waters from behind both the TVA Watauga Dam and the TVA Wilbur Dam. As a result, the summer temperature of the Watauga River at the Bee Cliff is approximately 52–53°F (11–12°C). The Watauga River is generally comfortable for kayaking, canoeing, and rafting during the summer months, but care must be taken to prevent hypothermia by prolonged exposure to the cold river water.

As TVA also guarantees a minimum release schedule during the summer season for riverine recreation below the TVA Wilbur Dam, the Watauga River will draw commercial whitewater rafting companies from distant rivers ---such as the Nolichucky River running through Erwin, Tennessee in Unicoi County--- when lack of adequate summer rain fall will not allow for rafting trips on these naturally flowing rivers during seasonal droughts.

During 1989, many scenes from the Chuck Norris action film Delta Force 2: The Colombian Connection were filmed at the Bee Cliff and other Carter County sites:

All content from Kiddle encyclopedia articles (including the article images and facts) can be freely used under Attribution-ShareAlike license, unless stated otherwise. Cite this article:
Bee Cliff (Tennessee) Facts for Kids. Kiddle Encyclopedia.