Beechey Island (Inuktitut: Iluvialuit) is an island located in the Canadian Arctic Archipelago of Nunavut, Canada, in Wellington Channel. It is separated from the southwest corner of Devon Island by Barrow Strait. Other features include Wellington Channel, Erebus Harbour, and Terror Bay. 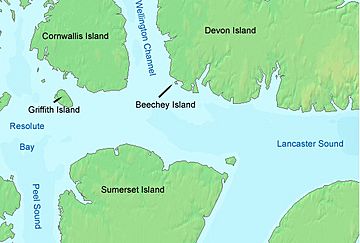 It is the site of several very significant events in the history of Arctic exploration. In 1845, the British explorer Sir John Franklin, commanding a new but ill-fated search for the Northwest Passage aboard HMS Erebus and HMS Terror, chose the protected harbour of Beechey Island for his first winter encampment. The site was not rediscovered until 1851, when British and United States search vessels anchored nearby.

In 1850, Edward Belcher used the island as a base. There are memorials to Franklin and other polar explorers and sailors on the island, including Joseph René Bellot.

In 1903, paying respect to Franklin, Norwegian explorer Roald Amundsen stopped at the island at the beginning of his successful voyage through the Northwest Passage.

In 1975, Beechey Island was declared a Territorial Historic Site by the government of the Northwest Territories. Since 1999, it has been part of the newly created Canadian territory of Nunavut.

Beechey Island is best known for containing three graves of Franklin expedition members, which were first discovered in 1850 by searchers for the lost Franklin expedition. The searchers found a large stone cairn, along with the graves of three of Franklin's crewmen – Petty Officer John Torrington, Royal Marine Private William Braine, and Able Seaman John Hartnell – but no written record nor indication of where Franklin planned to sail the next season.

In 1852, Commander Edward A. Inglefield arrived at Beechey, along with a physician Dr Peter Sutherland. John Hartnell's grave was opened, damaging his coffin, and Hartnell's memorial plaque on the coffin lid was removed. During a later expedition, a searcher named Thomas Morgan died aboard the vessel North Star on May 22, 1854, and was buried alongside the three original Franklin crew members.

In the 1980s, during two separate expeditions to Beechey, Canadian forensic anthropologist Dr. Owen Beattie examined the three bodies and found them (externally) remarkably well-preserved. Autopsies determined that lung disease and lead poisoning were among the probable causes of death; the lead appeared to come from the thousands of lead-soldered tins of provisions with which the Franklin expedition had been supplied (although later studies would suggest that the unique water distillation system used by the ships was the major source of lead poisoning).

Later research, however, found through hair sample comparisons between the Beechey remains and those of expedition assistant surgeon and naturalist Harry Goodsir (who died on the expedition a year later, and would therefore be expected to have yet further exposure, under the lead poisoning hypothesis) that the lead in the three men's remains, while indeed present at high levels now recognized as deleterious, was no higher than Goodsir's, and thus evidently mostly the result of exposure prior to the expedition (due to high everyday lead exposure common in the 19th century), and consequently was unlikely to be solely responsible for their deaths.

In the 1990s, due to the deteriorating condition of the Beechey grave markers, all markers were replaced with bronze memorials.

All content from Kiddle encyclopedia articles (including the article images and facts) can be freely used under Attribution-ShareAlike license, unless stated otherwise. Cite this article:
Beechey Island Facts for Kids. Kiddle Encyclopedia.