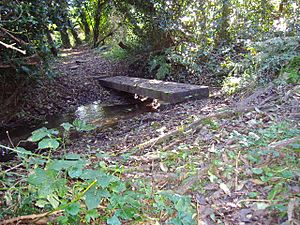 Beeston Beck in Sheringham Woods close to its source

Beeston Beck is a minor watercourse in the north of the county of Norfolk, England. 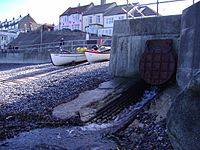 The outfall of Beeston Beck on Sheringham's east beach

Sheringham watermill began operating in c.1750 and was used in the processing of maize. By c.1865 the mill had been converted into a paper mill. The location of the Watermill was in Beeston Road which until 1901 had been called Paper Mill Road. The mill's power came from an overshot waterwheel. Beeston beck is only a small slow running beck and in order to power an overshot waterwheel there would have had to have been a good headwater. A Dam and a millpond would have provided this power but all traces of this engineering works have disappeared over the passing of time. It is believed that the mill pond may have been located on the site of what is now housing and local allotment gardens. A Blue plaque has been placed on the wall of a cottage in Beeston road at the location of the paper mill. The plaque was placed there by Sheringham & District Preservation Society. The beck now runs along the rear of these cottages before entering a culvert which runs under Beeston Road and Beach Road and appears at an outflow in the wall of the sea defences on the beach. From there on it runs across the beach and into the North Sea.

In June 2007 a group was formed in Sheringham for the care and preservation of Beeston Beck and its Tributary Sheringham Back Loke. The “Sheringham Loke Group”, as they call themselves, as their first project organized a Litter pick and stream safari. With Help from UK RiverCare and donations of equipment from Anglian Water the group managed to remove a variety of rubbish and flotsam which has accumulated over the years. Finds included a broken skateboard, mobile phone, a snapped fishing rod, a variety of smashed pottery, several boots and shoes, scaffold poles and a further 10 black bags of rubbish. After the cleanup operation, the group then undertook a survey of the wildlife in the watercourse. They were able to identify Freshwater shrimps (Gammarus), Mayfly larvae (Ephemeroptera), Caddisfly (Trichoptera) Larvae and Various species of worms and Leeches. They also discovered Stickleback fish (Gasterostreus aculeatus) and several species of frogs.

All content from Kiddle encyclopedia articles (including the article images and facts) can be freely used under Attribution-ShareAlike license, unless stated otherwise. Cite this article:
Beeston Beck (Norfolk) Facts for Kids. Kiddle Encyclopedia.