The beetroot is the taproot portion of the beet plant, usually known in North America as the beet, also table beet, garden beet, red beet, or golden beet. It is one of several of the cultivated varieties of Beta vulgaris grown for their edible taproots and their leaves (called beet greens). These varieties have been classified as B. vulgaris subsp. vulgaris Conditiva Group.

Other than as a food, beets have use as a food colouring and as a medicinal plant. Many beet products are made from other Beta vulgaris varieties, particularly sugar beet.

Beta is the ancient Latin name for beets, possibly of Celtic origin, becoming bete in Old English around 1400.

From the Middle Ages, beetroot was used as a treatment for a variety of conditions, especially illnesses relating to digestion and the blood. Bartolomeo Platina recommended taking beetroot with garlic to nullify the effects of "garlic-breath".

During the middle of the 19th century wine often was coloured with beetroot juice.

Below is a list of several commonly available cultivars of beets. Generally, 55 to 65 days are needed from germination to harvest of the root. All cultivars can be harvested earlier for use as greens. Unless otherwise noted, the root colours are shades of red and dark red with different degrees of zoning noticeable in slices. 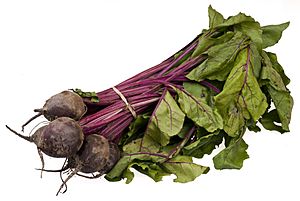 A bundle of beetroot 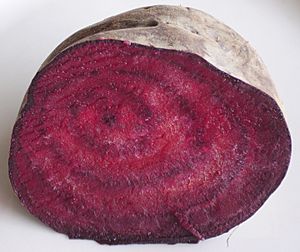 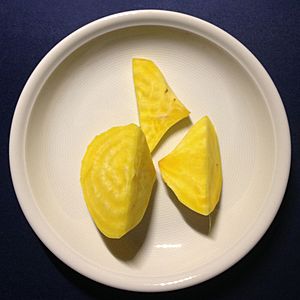 Usually the deep purple roots of beetroot are eaten boiled, roasted or raw, and either alone or combined with any salad vegetable. A large proportion of the commercial production is processed into boiled and sterilized beets or into pickles. In Eastern Europe, beet soup, such as borscht, is a popular dish. In Indian cuisine, chopped, cooked, spiced beet is a common side dish. Yellow-coloured beetroots are grown on a very small scale for home consumption.

The green, leafy portion of the beet is also edible. The young leaves can be added raw to salads, whilst the adult leaves are most commonly served boiled or steamed, in which case they have a taste and texture similar to spinach. Those greens selected should be from bulbs that are unmarked, instead of those with overly limp leaves or wrinkled skins, both of which are signs of dehydration. The domestication of beets can be traced to the emergence of an allele which enables biennial harvesting of leaves and taproot.

Beetroot can be boiled or steamed, peeled and then eaten warm with or without butter as a delicacy; cooked, pickled, and then eaten cold as a condiment; or peeled, shredded raw, and then eaten as a salad. Pickled beets are a traditional food in many countries.

A traditional Pennsylvania Dutch dish is pickled beet egg. Hard-boiled eggs are refrigerated in the liquid left over from pickling beets and allowed to marinate until the eggs turn a deep pink-red colour.

In Poland and Ukraine, beet is combined with horseradish to form popular ćwikła, which is traditionally used with cold cuts and sandwiches, but often also added to a meal consisting of meat and potatoes. The same in Serbia where the popular cvekla is used as winter salad, seasoned with salt and vinegar, with meat dishes. As an addition to horseradish it is also used to produce the "red" variety of chrain, a popular condiment in Ashkenazi Jewish, Hungarian, Polish, Russian and Ukrainian cuisine.

Popular in Australian hamburgers, a slice of pickled beetroot is combined with other condiments on a beef patty to make an Aussie burger.

When beet juice is used, it is most stable in foods with a low water content, such as frozen novelties and fruit fillings. Betanins, obtained from the roots, are used industrially as red food colourants, e.g. to intensify the colour of tomato paste, sauces, desserts, jams and jellies, ice cream, sweets, and breakfast cereals.

Beetroot can also be used to make wine.

Food shortages in Europe following World War I caused great hardships, including cases of mangelwurzel disease, as relief workers called it. It was symptomatic of eating only beets.

Raw beetroot is 88% water, 10% carbohydrates, 2% protein, and less than 1% fat (table). In a 100 gram amount providing 43 Calories, raw beetroot is a rich source (27% of the Daily Value, DV) of folate and a moderate source (16% DV) of manganese, with other nutrients having insignificant content (table).

In preliminary research, beetroot juice reduced blood pressure in hypertensive animals and so may have an effect on mechanisms of cardiovascular disease. Tentative evidence has found that dietary nitrate supplementation such as from beets and other vegetables results in a small to moderate improvement in endurance exercise performance.

Beets contain betaines which may function to reduce the concentration of homocysteine, a homolog of the naturally occurring amino acid cysteine. High circulating levels of homocysteine may be harmful to blood vessels and thus contribute to the development of cardiovascular disease. This hypothesis is controversial as it has not yet been established whether homocysteine itself is harmful or is just an indicator of increased risk for cardiovascular disease.

Betanin, obtained from the roots, is used industrially as red food colorant, to improve the color and flavor of tomato paste, sauces, desserts, jams and jellies, ice cream, candy, and breakfast cereals, among other applications.

The chemical adipic acid rarely occurs in nature, but happens to occur naturally in beetroot.

The red colour compound betanin is not broken down in the body, and in higher concentrations may temporarily cause urine or stools to assume a reddish colour, in the case of urine a condition called beeturia. Although harmless, this effect may cause initial concern due to the visual similarity to what appears to be blood in the stool, hematochezia (blood passing through the anus, usually in or with stool) or hematuria (blood in the urine).

Nitrosamine formation in beet juice can reliably be prevented by adding ascorbic acid.

All content from Kiddle encyclopedia articles (including the article images and facts) can be freely used under Attribution-ShareAlike license, unless stated otherwise. Cite this article:
Beet Facts for Kids. Kiddle Encyclopedia.