The city of Ephrata, Washington, at the east end of the hills, was originally called Beezley Springs, named after horse rancher Frank Beezley.

The hills rise from the east bank of the Columbia River between Moses Coulee and Frenchman Gap. They extend about 25 miles (40 km) to Ephrata and are part of the geological formation known as the Yakima Fold Belt, a group of anticlines. The next member of the fold belt is the roughly parallel Frenchman Hills to the south. Between the two ridges, Interstate 90 and Washington State Route 28 run through the Quincy Basin (the latter less than 5 miles (8 km) south of the Beezley Hills), a rich agricultural and vinicultural area (see Quincy-Columbia Basin Irrigation District).

Several springs occur on the lower slopes of the hills. In addition to Ephrata, formerly Beezley Springs (also spelled Beasley Springs), there are Baird Springs, Two Springs, and Willow Springs. The Grant County courthouse in Ephrata is geothermally heated from a hot spring.

Beezley Hills formed the northern barrier to the ice age Missoula Floods that poured out through Quincy Basin and over Babcock Ridge to reach the sea.

An earlier footrace in 2000 was also called the Beezley Burn and followed a similar course. 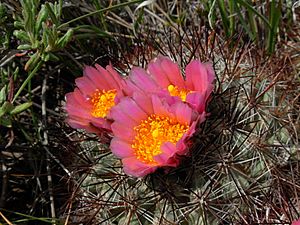 Flora in the Beezley Hills include Pediocactus simpsonii (hedgehog cactus) and Opuntia polyacantha (prickly pear). The latter was called "quite rare" in Washington by one author, who noted it was listed as nonexistent in the state by many authorities.

The Columbia Basin pygmy rabbit, listed as an endangered species in the United States, is endemic to the Columbia Basin. An active conservation and endangered species recovery program is under way with participation from the United States Fish and Wildlife Service (FWS), the Washington State Department of Fish and Wildlife and The Nature Conservancy, with the Beezley Hills designated a "recovery emphasis area" by FWS.

All content from Kiddle encyclopedia articles (including the article images and facts) can be freely used under Attribution-ShareAlike license, unless stated otherwise. Cite this article:
Beezley Hills Facts for Kids. Kiddle Encyclopedia.