Quincy is a city in Grant County, Washington, United States. The population was 7,543 at the 2020 census.

The Missoula Floods had their outlet at Trinidad, close to Quincy. Glacial erratics carried from as far away as Montana can be found nearby. The area also has an abundance of rimrock.

Quincy was founded as a railroad camp during construction of the Great Northern Railway in 1892, and was incorporated on March 27, 1907. It was named after Quincy, Illinois.

The arrival of the water from the Grand Coulee Dam in 1952 changed the town.

Quincy has a cold semi-arid climate (BSk) according to the Köppen climate classification system. 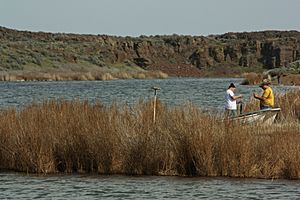 Fishing, hiking and bird-watching occur at nearby Quincy Lake, a remnant of the temporary Pleistocene lakes that were created by flood waters from glacial Lake Missoula.

There were 1,915 households, of which 55.2% had children under the age of 18 living with them, 55.2% were married couples living together, 16.2% had a female householder with no husband present, 9.0% had a male householder with no wife present, and 19.5% were non-families. 15.1% of all households were made up of individuals, and 6.7% had someone living alone who was 65 years of age or older. The average household size was 3.51 and the average family size was 3.87.

The City of Quincy is located in Central Washington with close proximity to winter and summer activities. The area offers boating, water skiing, hunting, fishing, snow skiing, and concerts. The Gorge Amphitheatre brings a variety of people through the Quincy Valley.

Quincy has several parks including an aqua park with a waterslide with 2 water fed half tubes, heated pools, and special areas for kids. The park is also home to a large field with a baseball diamond, playground, picnic area, and small skate-park.

Every 2nd Saturday in September, Quincy celebrates Farmer-Consumer Awareness Day. For a month beforehand, the roads leading to town are decorated with signs showing local crops and products made with them. On the day of the celebration, floats created by local schools and farm equipment parade through town. Free agricultural and geology tours are offered, as well as a produce sale, tractor pull, Farm-to-Market fun run, and many other activities.

Quincy celebrated its centennial in 2007.

Quincy High School won the 2A State Baseball Championship in 1998 and the 1A State Soccer Championship in 2014. In 2005, the Boys Basketball team took second in state. Every year Quincy has an annual Dru Gimlin 3 on 3 basketball tournament.

Quincy has long had an agricultural economy, which was enhanced by irrigation made possible with the Grand Coulee Dam. Major crops include potatoes, wheat, and timothy grass.

Orchards and vineyards are also displacing lower-value crops in the Quincy Valley. Washington State is a large grower of apples.

Technology companies such as Microsoft, Yahoo!, Dell and Intuit have located large data centers within the Quincy area since 2007. Microsoft's Columbia Data Center, built starting in 2006 and expanded several times, is said to be the world's largest data center. The centers, attracted to the area because of its abundant and cheap hydroelectricity, have been criticized for dodging fines from the Grant County Public Utility District for overusing electricity and for creating air pollution through their diesel backup generators.

The data centers are incentivized by tax credits offered by the state of Washington to stimulate economic development in the city. Two additional electrical substations are being built to handle expected demand from current and future companies.

Although George is the closest town to the Gorge Amphitheatre, Quincy is the closest town that offers services such as motels and a full grocery store. Quincy sees an uptick in population during concerts. Quincy was previously home to Tacos mi Pueblo, one of the most sought-after Mexican restaurants in the area.

The semi-arid climate allows Quincy to go for weeks or months without rain during the summer. This makes nearby water recreation such as Crescent Bar a major draw. Quincy is the closest town with services to Crescent Bar.

All content from Kiddle encyclopedia articles (including the article images and facts) can be freely used under Attribution-ShareAlike license, unless stated otherwise. Cite this article:
Quincy, Washington Facts for Kids. Kiddle Encyclopedia.