The Yakima Fold Belt of south-central Washington, also called the Yakima fold-and-thrust belt, is an area of topographical folds (or wrinkles) raised by tectonic compression. It is a 14,000 km2 (5,400 sq mi) structural-tectonic sub province of the western Columbia Plateau Province resulting from complex and poorly understood regional tectonics. The folds are associated with geological faults whose seismic risk is of particular concern to the nuclear facilities at the Hanford Nuclear Reservation (immediately northwest of the Tri-Cities) and major dams on the Columbia and Snake Rivers.

Error: No valid link was found at the end of line 10.

The topographical distinctness of the Yakima Folds (see the shaded-relief image) is due to their formation in a layer of lava flows and sedimentary deposits that have filled-in and generally smoothed the topographic surface of a large area of the Columbia Basin. The extent of these lava flows was limited to the west and north by the rising Cascade Mountains and the Wenatchee Mountains. The lava flows extend east well beyond this image, but the Yakima Folds do not. The northernmost fold seen here (Frenchman Hills) ends at the Potholes Reservoir, another (Saddle Mountains) terminates just south of there, near the town of Othello (red circle). South of the Tri-Cities the rampart of the Horse Heaven Hills extends for a short distance past the Columbia River. The ends of these ridges mark the edge of a block of continental crust (part of the North American craton, indicated by the dashed orange line) that has resisted the tectonic compression that formed the ridges.

The Yakima Fold Belt is also located on, and the orientation and spacing of some of the Folds influenced by, the Olympic-Wallowa Lineament (OWL), a broad zone of linear topographical features (dashed yellow line) extending from the Olympic Peninsula in northwestern Washington to the Wallowa Mountains in northeastern Oregon. 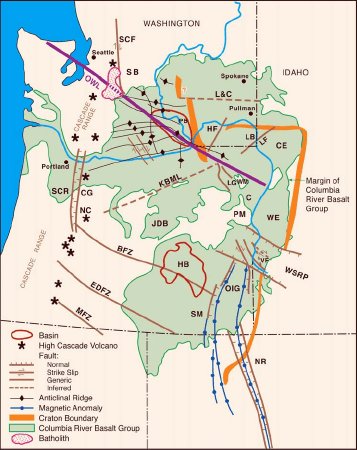 Yakima Fold Belt (thin purple lines with black diamonds) in context of major regional geological structures. Pale green is extent of the Columbia River Basalts. Thickest purple line is the OWL, thickest orange line corresponds to the craton edge in the shaded-relief map above. The Klamath-Blue Mountain Lineament (KBML, approximate location, extends to coast) is the southern edge of the marine basalts of Siletzia. BFZ, EDFZ, and MFZ are the Brothers, Eugene-Denio, and McLaughlin fault zones.

It is the central portion of the Olympic-Wallowa Lineament, referred to as the Cle Elum-Wallula deformed zone (CLEW), constising of a series of generally east-trending narrow asymmetrical anticlinal ridges and broad synclinal valleys formed by folding of Miocene Columbia River basalt flows and sediments. In most parts of the belt the folds have a north vergence (Columbia Hills' south vergence is an exception) with the steep limb typically faulted by imbricate thrust faults. Fold lengths range from 1 km to 100 km with wavelengths from several kilometers to 20 km.

A graben underlies nearly the entire Yakima Fold Belt and has been subsiding since Eocene time, and continues to sink at a slow rate.

A 2011 report found aeromagnetic, gravity, and paleoseismic evidence that the Yakima Fold Belt is linked to active Puget Sound faults.

Studies of the motion of the Yakima Fold Belt have been undertaken to evaluate seismic hazards at the Hanford Site.

All content from Kiddle encyclopedia articles (including the article images and facts) can be freely used under Attribution-ShareAlike license, unless stated otherwise. Cite this article:
Yakima Fold Belt Facts for Kids. Kiddle Encyclopedia.