The Belcher Islands (Inuktitut: Sanikiluaq) are an archipelago in the southeast part of Hudson Bay. The Belcher Islands are spread out over almost 3,000 square kilometres (1,160 sq mi). Administratively, they belong to the Qikiqtaaluk Region of the territory of Nunavut, Canada. The hamlet of Sanikiluaq (where the majority of the archipelago's inhabitants live) is on the north coast of Flaherty Island and is the southernmost in Nunavut. Along with Flaherty Island, the other large islands are Kugong Island, Tukarak Island, and Innetalling Island. Other main islands in the 1,500–island archipelago are Moore Island, Wiegand Island, Split Island, Snape Island and Mavor Island, while island groups include the Sleeper Islands, King George Islands, and Bakers Dozen Islands. 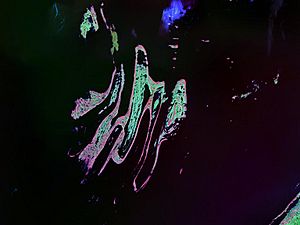 Before 1914, English-speaking cartographers knew very little about the Belcher Islands, which they showed on maps as specks, much smaller than their true extent. In that year a map showing them, drawn by George Weetaltuk, came into the hands of Robert Flaherty, and cartographers began to represent them more accurately. The islands are named for Royal Navy Admiral Sir Edward Belcher (1799-1877).

In 1941, a religious movement led by Charley Ouyerack, Peter Sala and his sister Mina, caused the death by blows or exposure of nine persons. 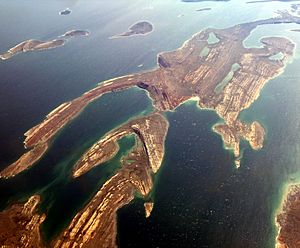 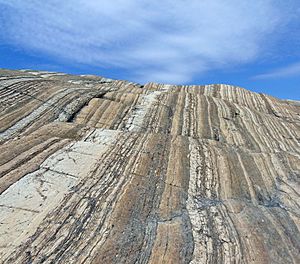 Thin-bedded Proterozoic sedimentary rocks near Sanikiluaq hamlet. These rocks are about 2 billion years old. Width of bottom of photo is about 5 metres.

From youngest to oldest, the Belcher Group is composed of:

The occurrence of very high-quality soapstone in the Belcher Islands supports a locally significant carving industry. These soapstone occurrences formed when sedimentary rocks of the Belcher Group were intruded by Haig sills and dykes approximately 1.87 billion years ago. Most soapstone is quarried from a site on western Tukarak Island where dolomite of the Costello Formation was intruded by hot magma, with dolomite reacting with quartz and water under intense heat to form talc, calcite, and carbon dioxide:

Other minerals within the soapstone are largely calcite, dolomite, talc, and chlinochlore, with minor amounts of ilmenite.

Although most soapstone has been sourced from two quarries, the relatively widespread occurrence of Haig intrusions within the Belcher Islands suggests that there may be many more possible sources of high-quality soapstone not yet discovered.

Several species of willow (Salix) form a large component of the native small shrubbery on the archipelago. These include rock willow (Salix vestita), bog willow (S. pedicellaris), and Labrador willow (S. argyrocarpa), as well as naturally occurring hybrids between S. arctica and S. glauca. Other than in valley regions, trees cannot grow on the islands because of a lack of adequate soil.

The main wildlife consists of belugas, walrus, caribou, common eiders and snowy owls all of which can be seen on the island year round. There is also a wide variety of fish that can be caught such as Arctic char, cod, capelin, lump fish, and sculpin. The historical relationship between the Sanikiluaq community and the eider is the subject of a feature-length Canadian documentary film called People of a Feather. The director, cinematographer and biologist Joel Heath, spent seven years on the project, writing biological articles on the eider.

All content from Kiddle encyclopedia articles (including the article images and facts) can be freely used under Attribution-ShareAlike license, unless stated otherwise. Cite this article:
Belcher Islands Facts for Kids. Kiddle Encyclopedia.