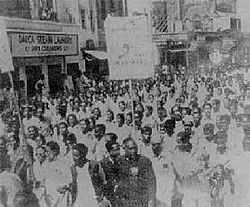 A march for the Bengali Language Movement held on 21 February 1952 in Dhaka. 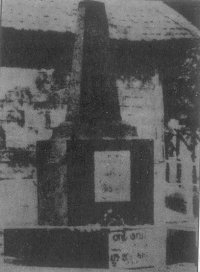 The Bengali Language Movement (also called the Language Movement) were protests by people living in Bangladesh, which was part of Pakistan during that time. The people living in Bangladesh started protesting because they did not like that the government of Pakistan made Urdu the official language, which they did not speak. The government responded to the protests by making meetings outside illegally . At the height of the movement on 21 February 1952, police killed students that were protesting. The Shaheed Minar was a monument built to honor these students.

Bengali did become an official language on 29 February 1956. This day is celebrated by Bangladesh as Language Movement Day.

All content from Kiddle encyclopedia articles (including the article images and facts) can be freely used under Attribution-ShareAlike license, unless stated otherwise. Cite this article:
Bengali Language Movement Facts for Kids. Kiddle Encyclopedia.