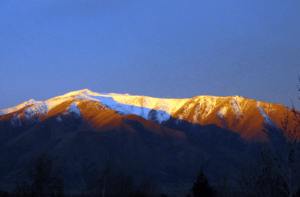 View of southwestern side of the Benmore Range, South Island, New Zealand, at sunset, from Omarama village. Benmore Peak is the highest point at left of centre.

Benmore Peak is the highest point of the Benmore Range, an island range located in the southern half of the Mackenzie Basin, South Island, New Zealand.

The range mostly consists of greywacke and some schist. Flora includes slim snow tussock (Chionochloa macra) and narrow-leaved snow tussock (Chionochloa rigida) as well as an array of alpine herbs, while fauna include the New Zealand falcon, sky lark, chukar, California quail and the New Zealand pipit, as well as the common skink and common gecko.

Benmore Peak Observatory (BPO) is sited on privately owned land at the summit plateau. The facility has instruments and structures for astronomy and meteorology at the peak and down to the 1,830 m (6,002 ft) level. It is the highest altitude observatory in the Southern Hemisphere outside of Antarctica and the Andes of South America.

The NZ Department of Conservation acquired 12 km2 (1,200 hectares / 2,965 acres) of land between The Cairn and Sutherlands Peak from Glenbrook Station and it has been officially designated a public Conservation Area. It incorporates an area of wetlands as well as much drier elevated areas. A public walking track is accessible via an easement across Glenbrook Station.

All content from Kiddle encyclopedia articles (including the article images and facts) can be freely used under Attribution-ShareAlike license, unless stated otherwise. Cite this article:
Benmore Peak Facts for Kids. Kiddle Encyclopedia.