Benson Hollow is a tributary of Bowman Creek in Wyoming County, Pennsylvania, in the United States. It is approximately 0.9 miles (1.4 km) long and flows through Eaton Township. The watershed of the stream has an area of 1.82 square miles (4.7 km2). Benson Hollow is a first-order stream and is not designated as an impaired waterbody. The surficial geology in its vicinity consists of Wisconsinan Outwash, alluvium, Wisconsinan Till, bedrock, and a lake. The stream's watershed is designated as a High-Quality Coldwater Fishery and a Migratory Fishery. 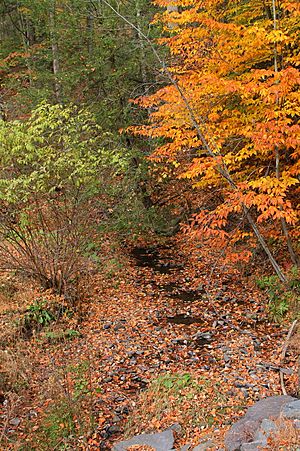 Benson Hollow begins in a valley to the west of Cedar Ledge in Eaton Township. It flows south-southeast for a few tenths of a mile before turning east-southeast. Several tenths of a mile further downstream, the stream reaches its confluence with Bowman Creek.

Benson Hollow is not designated as an impaired waterbody.

During the Ice Age, glacial meltwater from Benson Hollow helped form a delta in the valley of Bowman Creek. There is a "deeply notched" col at the stream's headwaters.

Near the culvert, Benson Hollow has a streambed made of gravel with an average grain size of 45 millimeters (1.8 in). The stream is a Rosgen C Type stream and does not have large loads of debris. The surficial geology along the lower reaches of the stream, but alluvium and a lake occur in the upper reaches. The stream's valley is flanked by Wisconsinan Till and bedrock consisting of sandstone and shale.

The watershed of Benson Hollow has an area of 1.82 square miles (4.7 km2). The stream is entirely in the United States Geological Survey quadrangle of Tunkhannock.

Benson Hollow is a first-order stream.

A single-barrel culvert carries Benson Hollow in one reach. The culvert passes a 25-year maximum design flow. Areas of deposition occur upstream of the culvert and a large scour pool occurs downstream of it. These phenomena are typical of such culverts.

The drainage basin of Benson Hollow is designated as a High-Quality Coldwater Fishery and a Migratory Fishery. Wild trout naturally reproduce in the stream from its headwaters downstream to its mouth.

All content from Kiddle encyclopedia articles (including the article images and facts) can be freely used under Attribution-ShareAlike license, unless stated otherwise. Cite this article:
Benson Hollow Facts for Kids. Kiddle Encyclopedia.