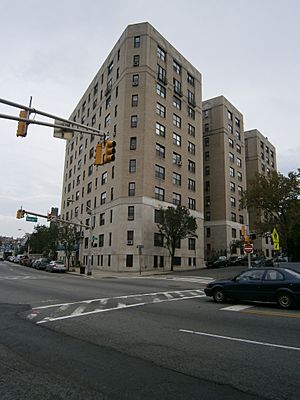 The Bergen Section of Jersey City, New Jersey is the neighborhood on either side of Kennedy Boulevard between Saint Peter's College/ McGinley Square and Communipaw Avenue in the Bergen-Lafayette section of the city. The name Bergen, used throughout Hudson County, is taken from the original Bergen, New Netherland settlement at Bergen Square.

While there was discussion of building a county long road as early as the 1870s, the Boulevard was officially opened in 1896. In the early automobile age it became part of the route of the Lincoln Highway and one of the busiest roads in the state. Bergen Avenue is a major north-south thoroughfare in the city running south from Journal Square along the ridge of the diminishing Hudson Palisades known as Bergen Hill. Monticello Avenue, which takes its name from mid 19th "suburban" development, is a shopping district lined with many turn-of-the-century buildings with storefronts being brought back into use. As its name suggests West Bergen overlaps this neighborhood.

The section retains much of the character that at one time made it the premiere 20th century residential district of the city. A variety of architectural styles can be found along the Boulevard, Bergen Avenue, and sidestreets including 19th-century rowhouses, Victorian and Edwardian mansions. Many of the multi-family buildings are pre-war, built during the period of expansive growth in the 1920s and 1930s, sometimes Art Deco style. including The Hague, residence of one of the city's best-known mayor, Frank Hague. Among the many landmarks in the area are the Fairmount Apartments, Temple Beth-El, and the former Jersey City YMCA. Lincoln the Mystic, a statue of a seated Abraham Lincoln by James Earle Fraser is situated at the entrance to the park which bears the president's name. and is one of the Hudson County's largest public green spaces. 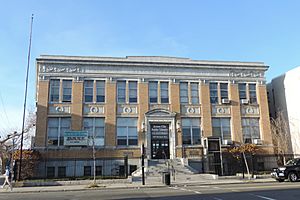 Approval was required by the city, and the ordinance was passed in June 2015. 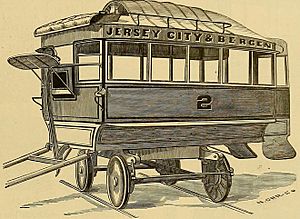 All content from Kiddle encyclopedia articles (including the article images and facts) can be freely used under Attribution-ShareAlike license, unless stated otherwise. Cite this article:
Bergen Section, Jersey City Facts for Kids. Kiddle Encyclopedia.