What became Greenville was the territory of the Hackensack and Raritan Indians at the time of European contact in the 17th century. They called the area on Bergen Neck Minkakwa (alternatively spelled Minelque and Minackqua) meaning a place of good crossing. This is likely so because it was the most convenient pass between the two bays on either side of the neck. Interpreted as place where the coves meet, in this case where they are closest to each, it describes a spot advantageous for portage. First settled by New Netherlanders in 1647. the Caven Point settlement on the west shore of the Upper New York Bay between Pamrapo and Communipaw was part of Pavonia, which, upon receiving its municipal charter in 1661 was renamed Bergen. The name Caven is an anglicisation of the Dutch word Kewan, which in turn was a "Batavianized" derivative of an Algonquian word meaning peninsula. 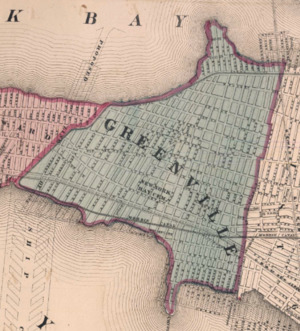 Greenville in 1872, one year before consolidation

During the British and early American colonial era the area was part of Bergen Township. The 19th century Jersey City and Bergen Point Plank Road (today's Garfield Avenue) ran through Greenville (from Paulus Hook to Bergen Point). Greenville became part of the newly formed Hudson County in 1840. The town grew as a fashionable suburb of New York City.Greenville Township was incorporated as a township by an Act of the New Jersey Legislature on April 14, 1863, from portions of Bergen Town. It was absorbed into Jersey City on February 4, 1873, ending its life as an independent municipality.

Greenville was settled by many working class Irish Catholic families, as well as other ethnic groups. The neighborhood's demographics changed dramatically starting in the 1950s, sixties and seventies, with the decline of factories and collapse of the independent railroad lines. Today, the area east of Kennedy Boulevard is heavily black, while the area west of Kennedy Boulevard is more diverse. Greenville also has a sizeable Hispanic population and many of the older white residents remain in the neighbourhood. 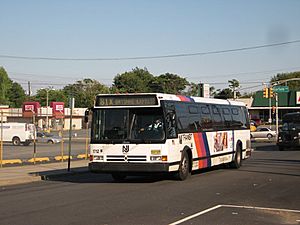 The Richard Street and Danforth Avenue stations of the Hudson-Bergen Light Rail are located on the district's east side east of Garfield Avenue, while West Side Branch Hudson-Bergen Light Rail stations (including the MLK Station) are on its northern perimeter, which overlaps Bergen-Lafayette. There is bus service along its north south-streets avenues: Ocean Avenue, Old Bergen Road, Kennedy Boulevard, and West Side Avenue operated by New Jersey Transit buses to Journal Square, Exchange Place, and Bayonne, the Red & Tan buses 99s and 4. The Greenville Bus Garage on Old Bergen Road is one of the largest in Hudson, housing more than 120 buses for Routes: 6, 80, 81, 87, 120, 126.

Links to articles related to Greenville 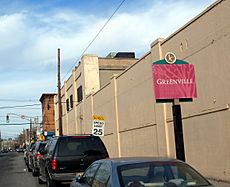 All content from Kiddle encyclopedia articles (including the article images and facts) can be freely used under Attribution-ShareAlike license, unless stated otherwise. Cite this article:
Greenville, Jersey City Facts for Kids. Kiddle Encyclopedia.