Communipaw is an unincorporated community and neighborhood located within Jersey City in Hudson County, New Jersey, United States. It is located west of Liberty State Park and east of Bergen Hill, and the site of one of the earliest European settlements in North America. It gives its name to the historic avenue which runs from its eastern end near LSP Station through the neighborhoods of Bergen-Lafayette and the West Side that then becomes the Lincoln Highway. Communipaw Junction, or simply, The Junction, is an intersection where Communipaw, Summit Avenue, Garfield Avenue, and Grand Street meet, and where the toll house for the Bergen Point Plank Road was situated. Communipaw Cove at Upper New York Bay, is part of the 36-acre (150,000 m2) state nature preserve in the park and one of the few remaining tidal salt marshes in the Hudson River estuary.

Communipaw was part of Bergen City, New Jersey during its brief incarnation between 1855-1870 before merging with Jersey City, and was urbanized during the late half of the 19th century. Some streets of the neighborhood are part of the Communipaw-Lafayette Historic District. Lafayette Park is likely named for the Marquis de Lafayette, who was stationed in Bergen in 1799, and later re-visited in 1824 A city square similar to Van Vorst Park and Hamilton Park the buildings surrounding it were constructed in different periods. Whitlock Cordage is an intact complex of industrial buildings built in the Lafayette section along the long ago filled Morris Canal. The Housing Trust of America purchased the property to preserve the structures as affordable housing. The section near Johnston Avenue was the site of a stop on the Underground Railroad and African-American burial ground. Ficken's Warehouse, once the site of Bergen City's main post office, is on the National Register of Historic Places listings in Hudson County, New Jersey. Berry Lane Park was formerly an industrial area. 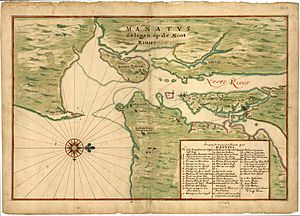 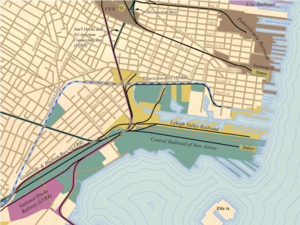 Modern map showing the situation in 1910, with the village on the cove surrounded by rail-infrastructure.

At the time of European settlement in the 17th century, Communipaw was the site of the summer encampament and counsel fire of the Hackensack Indians. a phratry of the Lenape. They, along with the Raritan, Tappan, Wecquaesgeek, Canarsee and other groups who circulated in the region were collectively known as the River Indians by the immigrating population.

Henry Hudson, commissioned by the Dutch East India Company, anchored along the shore at Communipaw in 1609 during his explorations of the Upper New York Bay, North River (Hudson River) and Hudson Valley.

For a time it bore the name of the Dutchman who settled there, Jan Everts Bout., and was called Jan de Lacher's Hoeck., or Jan the Laugher's Point, apparently in reference to his boisterous character. Plantations, worked by enslaved Africans, spread across the low-lying areas between the shoreline and the hill. It was here that Tappan and Wecquaesgeek fleeing dominant tribes from the north had taken refuge in 1643. They were attacked in the incident known as the Pavonia Massacre, subsequently leading to Kieft's War.

Originally, the village of Communipaw was part of the colony under the jurisdiction to the Dutch West India Company. In 1653, became part of the Commonality of New Amsterdam, (which included all the settlements at Pavonia, Manhattan, Staten Island, and Long Island), a separate village in 1658, under the jurisdiction of the Bergen, established at contemporary Bergen Square. By 1669, regulated ferry service to New Amsterdam was established. After the last English takeover of New Netherland in 1674 it became part of the Province of New Jersey, in the county of Bergen, though it retained its Dutch character for hundreds of years. Washington Irving visited it often (at least once with future US president Martin van Buren) for inspiration. Writing in the early 19th century, he often referred to Communipaw as being the stronghold of traditional Dutch culture. John Quidor, an American Romantic painter, created works inspired the village: Embarkation from Communipaw and The Voyage from Communipaw to Hell Gate. Suydam Street, which can translate as south dam runs for one block south of Communipaw Avenue is taken early Dutch family, whose descendent, Rev. J. Howard Suydam, D.D, was member and historian of the Holland Society of New York.

Originally, the waters of the Upper New York Bay facing the village (situated near the site of today's Liberty Science Center) hosted vast oyster beds that were harvested well into the 19th century. As it was industrialized, first with the construction of ports and later with rail infrastructure, the shoreline was expanded with landfill, notably by the Lehigh Valley Railroad and the Central Railroad of New Jersey. Communipaw Terminal, officially known as the Central Railroad of New Jersey Terminal, was the waterfront terminus. This monument (which operated until 1967), along with the Statue of Liberty National Monument (consisting of Ellis Island and Liberty Island) recalls the period of massive emigration to the United States. The cove just to the south of the station is sometimes still called Communipaw Cove. The railroad also maintained a Communipaw Station in the neighborhood farther inland along the right of way now used by the Hudson Bergen Light Rail. Johnston Avenue is named for an early president of the company.

Buses traveling southbound through The Junction are the # 4, NJT 81 through Greenville to Curries Woods, with the 81 continuing to Bayonne. On some trips the NJT6 alternates its routes along the Lafayette Loop. Northbound the NJT6 travels to Journal Square, while the 4 and the NJT81 travel through Downtown Jersey City to Exchange Place. The nearest stations of the Hudson Bergen Light Rail are located along the southern periphery of the neighborhood at Garfield Avenue in Claremont neighborhood and at LSP.

All content from Kiddle encyclopedia articles (including the article images and facts) can be freely used under Attribution-ShareAlike license, unless stated otherwise. Cite this article:
Communipaw Facts for Kids. Kiddle Encyclopedia.