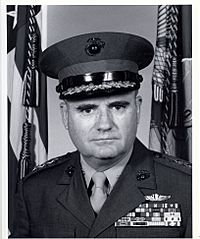 He served in the Marine Corps for 39 years in both staff and command capacities. After retiring from the Marine Corps, he began working as the chief military correspondent for the New York Times. He was a military analyst for NBC. He was the author of three accounts of American wars in Iraq, The Generals War (1995); Cobra II (2006); and Endgame (2012).

Trainor died on June 2, 2018 in Sterling, Virginia of laryngeal cancer at the age of 89.

All content from Kiddle encyclopedia articles (including the article images and facts) can be freely used under Attribution-ShareAlike license, unless stated otherwise. Cite this article:
Bernard E. Trainor Facts for Kids. Kiddle Encyclopedia.