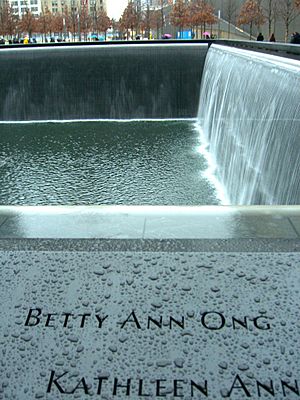 Betty Ann Ong (February 5, 1956 – September 11, 2001) was an American flight attendant who was on American Airlines Flight 11 when it was taken over by terrorists and flown into the North Tower of the World Trade Center in New York City, as part of the September 11 attacks. She was born in San Francisco, California.

At the time of her death, Ong lived in Andover, Massachusetts. On September 11, 2001, she was on Flight 11 so that she could go back to Los Angeles and go on a vacation to Hawaii with her sister. When the plane was taken over, she called in to American Airlines and told them that the plane had been taken over. During her call, she said that none of the crew could open the cockpit door, a passenger and two flight attendants had been hurt, and that she thought someone had sprayed Mace or something else in business class. She also told them which seats the terrorists on the plane were sitting in.

All content from Kiddle encyclopedia articles (including the article images and facts) can be freely used under Attribution-ShareAlike license, unless stated otherwise. Cite this article:
Betty Ong Facts for Kids. Kiddle Encyclopedia.