Bexley is a suburban city in Franklin County, Ohio, United States. The population was 13,928 at the 2020 census. Founded as a village over a hundred years ago, the city of Bexley is an old, tree-lined suburb of Columbus, the Ohio state capital, situated on the banks of Alum Creek next to Driving Park and Wolfe Park, just east of the Franklin Park Conservatory. It is horizontally bisected by the National Road (Main Street), serving as a reminder of Bexley's origins as a merger between the prestigious Bullitt Park neighborhood to the north, and the Lutheran college community of Pleasant Ridge to the south.

The historic suburb is perhaps best known, however, for its large houses and estates, located primarily in Bullitt Park. The most famous of these include the Jeffrey Park Mansion (a.k.a. "Kelveden"), the home of the president of Ohio State University, and the Ohio Governor's Mansion. Located in northern Bexley, the Governor's Mansion—originally built as a private residence in 1925 and given to the state in 1955—has served as the official residence of Ohio governors since 1957, though Governor James A. Rhodes (in his final two terms in office) and Governor John Kasich, both of whom were residents of central Ohio, chose to remain in their private homes while in office.

Along with the municipalities of Minerva Park, Whitehall, Worthington, Upper Arlington, and Valleyview, Bexley is a geographic enclave of Columbus.

Bexley was named at the suggestion of an early resident, Col. Lincoln Kilbourne, in honor of his family's roots in Bexley, in Kent, England. The village of Bexley was incorporated in 1908 when prominent citizens of Bullitt Park along Alum Creek, including industrialist and 35th Mayor of Columbus Robert H. Jeffrey, agreed to merge with the Lutheran community of Pleasant Ridge near Capital University and the Lutheran seminary.

Bullitt Park had been founded in 1889, when Logan M. Bullitt of Philadelphia submitted his first plat for the area. Wealthy citizens of Columbus continued to build urban townhouses and country homes to the east along Broad Street and Town Road (now Bryden Road), extending to Franklin Park. By the 1890s, several large homes took root across Alum Creek in the Bullitt Park area, one of which becoming the original campus of the Columbus School for Girls, still an exclusive girls' private school in Bexley.

The onset of the Spanish–American War was also instrumental in Bexley's history. In 1898, Ohio Governor Asa Bushnell chose a cluster of unsold lots around Broad and Drexel in Bullitt Park as an assembly site for those headed for war. Camp Bushnell, as it was known, was home for three weeks to 8,000 Ohio volunteers headed for Cuba. This led to the development of water and sewer lines for the soldiers, thus preparing the area for later real estate development.

By 1908, the residents of Bullitt Park north of Main Street, and Pleasant Ridge south of Main Street, decided to merge their neighborhoods and incorporated as the Village of Bexley. The village reached the 5,000 population mark required by the state of Ohio to become a city in 1928 (still a requirement) and, on New Year's Day 1932, Bexley officially became a city. William A. Schneider was elected the first mayor of the City of Bexley in 1935. Mayor Schneider built the first city hall, and led Bexley through a long and profitable growth period. He remained in office for 32 years before retiring.

In March of 2013, the City of Bexley was accredited as an arboretum by the Morton Register of Arboreta, making it the first City in the United States to successfully obtain arboretum accreditation. 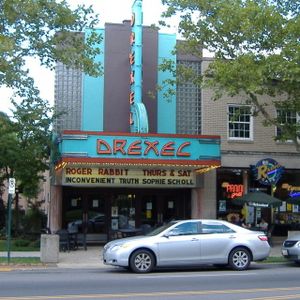 An important center for the arts and culture, Bexley is home to several churches and synagogues, numerous historic sites and pieces of outdoor sculpture, the original Drexel Theater and Rubino's Pizzeria, and several miles of Route 40, known as the National Road. Adjoining Bexley to the west is the beautiful Franklin Park Conservatory.

The 1930s era landmark Drexel Movie Theater at 2254 E. Main Street in Bexley is a leading area movie exhibitor, featuring independent and international films on three screens. Owned for 30 years by Jeff and Kathy Frank, as of Spring 2011 the theater is operated by Friends of the Drexel Inc, as a 501 c(3) non-profit foundation. The Columbus Association of the Performing Arts (CAPA) manages the theatre.

Rubino's Pizzeria, mentioned in Be True to Your School, has become famous for barely changing since its opening in the early 1950s. Rubino's does not deliver, and only accepts cash or checks. The Main Street address is its only location and has always been independently run. Known for its thin crust pizza, carryout pizzas are packaged in paper rather than cardboard boxes. Interestingly enough, Rubino's was founded by a man named Rubin Cohen. Another long-standing family-run business is Johnson's Real Ice Cream just east of the pizzeria.

Bexley houses many works from well-known artists. For example, it is the home of a number of sculptor and Holocaust survivor Alfred Tibor's creations, including those at the Trinity Lutheran Seminary, Saint Charles Preparatory School, and the Congregation Agudas Achim. 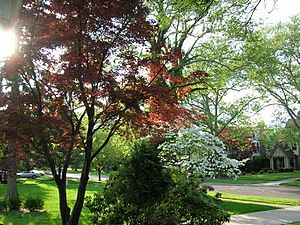 Central Bexley consists primarily of large homes of between 2,000 and 4,500 square feet, and many residents are white-collar professionals characteristic of the upper middle class.

South Bexley contains smaller homes, many of which have less than 1,500 square feet. Clerical and trades workers, as well as young professionals with small children, are more easily found among South Bexley residents, and the neighborhood would be seen as exhibiting many characteristics of the middle class.

Taken as whole, Bexley has remained a community of primarily white residents with above-average resources. A plurality of Bexley residents consider themselves adherents of Mainline Protestant denominations. The city is home to two Lutheran (ELCA) churches, a United Methodist church and an Episcopal church, and not far outside of the city may be found three Presbyterian churches. Bexley contains many Jewish residents and is home to three synagogues (Agudas Achim, Ahavas Sholom and Torat Emet). The city also has a significant number of Roman Catholic residents, and three Roman Catholic churches are located just outside Bexley's borders. While still a small minority of residents, African-American and mixed-race families are becoming increasingly prominent in the community.

As home to Capital University (founded by Lutherans in 1850) and nearby Trinity Lutheran Seminary (1830) and with a significant number of residents employed by Ohio State University,, Bexley is a highly educated community that values its public school district, the Bexley City Schools. Bexley has, in recent years, also gained the reputation of being increasingly progressive both politically and socially, a trend shared by other inner-ring suburbs in Franklin County.

There were 4,661 households, of which 38.2% had children under the age of 18 living with them, 57.6% were married couples living together, 9.4% had a female householder with no husband present, 3.4% had a male householder with no wife present, and 29.6% were non-families. 23.5% of all households were made up of individuals, and 10% had someone living alone who was 65 years of age or older. The average household size was 2.59 and the average family size was 3.09. 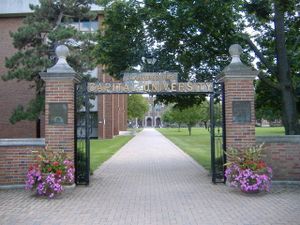 Bexley boasts several public and private educational institutions, including the Bexley City Schools, Columbus School for Girls, Saint Charles Preparatory School, Capital University, and Trinity Lutheran Seminary (of the Evangelical Lutheran Church in America (ELCA)). Its public and private K–12 schools make Bexley a sought-after city for families. It is reported that 95–100% of students graduating from public schools in the Bexley City School District, along with the Columbus School for Girls and Saint Charles Preparatory School go on to attend college.

Columbus School for Girls (CSG), founded in 1898, is one of the oldest private schools in the city. Located for nearly 50 years in a stately Georgian mansion known as "Parsons Place", in 1946 CSG moved to a more modern mansion with larger grounds on South Columbia Avenue in Bexley. This remains the school's main campus, which today is one of three campuses.

Another all-boys private school, Columbus Academy, was founded in Bexley in 1911 and housed in a mansion in Bullitt Park. During the first half of the 20th century, Columbus Academy and Columbus School for Girls, both populated primarily by Protestant students from wealthy Anglo-Germanic families, held most of their joint school activities and "mixers" with each other. Columbus Academy grew and relocated to Gahanna (northeast of Columbus) in 1968. It became co-ed in 1991.

Bexley is also home to two institutions of higher education. Capital University is a private liberal arts university, affiliated with the ELCA. Founded in 1830 as a theological seminary and separated in 1850, it is one of the oldest and largest Lutheran-affiliated universities in the country. It is also home to the Capital University Law School. The law school has several prominent faculty members and superior bar passage rates.

Bexley has been the home of many prominent citizens including Bob Greene, the former Chicago Tribune columnist, who wrote Be True to Your School; children's author R. L. Stine; and Michael Jeffries, former chief executive officer of Abercrombie & Fitch.

Josh Radnor, the star of the CBS sitcom How I Met Your Mother; Marco Arment, lead developer of the blogging website Tumblr; and Laurie Lea Schaefer, Miss America of 1972, have also called Bexley home. Harvey Wasserman, writer and anti-nuclear activist, lives in Bexley (the famous 1970s phrase "No Nukes" is partially attributed to him). Martha B. Bush, the widow of Samuel P. Bush (the Columbus industrialist and founder of the Presidential Bush family), lived on North Drexel, though the Bush family's more notable addresses were in East Columbus, Marble Cliff, and Blacklick.

All content from Kiddle encyclopedia articles (including the article images and facts) can be freely used under Attribution-ShareAlike license, unless stated otherwise. Cite this article:
Bexley, Ohio Facts for Kids. Kiddle Encyclopedia.