Bickleton is a census-designated place in Klickitat County, Washington, United States. Bickleton was first settled in 1879 by Charles N. Bickle. The population was 88 at the 2010 census.

According to the Köppen Climate Classification system, Bickleton has a warm-summer Mediterranean climate, abbreviated "Csb" on climate maps.

There were 49 households out of which 26.5% had children under the age of 18 living with them, 55.1% were married couples living together, 6.1% had a female householder with no husband present, and 36.7% were non-families. 28.6% of all households were made up of individuals and 12.2% had someone living alone who was 65 years of age or older. The average household size was 2.31 and the average family size was 2.87. 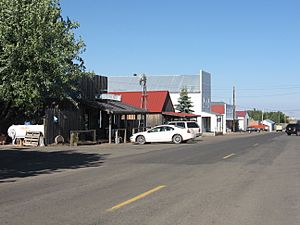 The Bluebird Tavern and the town of Bickleton, Washington.

The town now has a gas station, yet you must have an account in order to use it.It has a tavern as well, the Bluebird Inn. Opened in 1882, it is billed as the oldest functioning tavern in the state and the original pool table, a 1903 Brunswick is still used by regulars. The town also features a restored 1905 Herschell-Spillman carousel. 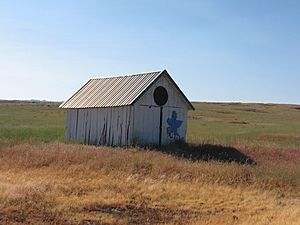 A lonely shed outside of Bickleton proudly showing the bluebird connection.

Bickleton is known as the bluebird capital of the world. In the 1950s Jess and Elva Brinkerhoff were picnicking in this small town after coming from nearby Richland and put a can in a tree for some birds. It became a local fad and now there are thousands of birdhouses purposely built to house bluebirds.

Both the mountain bluebird and the western bluebird nest in Bickleton. Maintaining the houses by cleaning old nests is a major task for the local residents. It is funded by profits from bluebird souvenirs sold to tourists at Whitmore's Whoop-n-Holler Ranch Museum.

All content from Kiddle encyclopedia articles (including the article images and facts) can be freely used under Attribution-ShareAlike license, unless stated otherwise. Cite this article:
Bickleton, Washington Facts for Kids. Kiddle Encyclopedia.