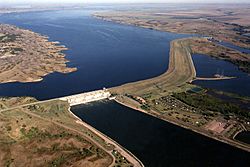 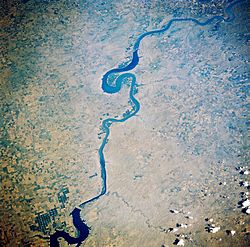 Lake Sharpe with visible Big Bend Dam from space, August 1989. View is to the east-southeast.

The dam, 95 feet (29 m) high and 10,570 feet (3,220 m) in length, was constructed as part of the Pick-Sloan Plan for Missouri watershed development authorized by the Flood Control Act of 1944. Construction began in 1959 and the embankment was completed in July 1963. Power generation began at the facility in 1964 and the entire complex was completed in 1966 at a total cost of $107 million. The hydroelectric plant generates 493,300 kilowatts of electricity at maximum capacity, with an annual production of 969 million kilowatt hours, and meets peak-hour demand for power within the Missouri River Basin.

Located near Fort Thompson, South Dakota, just south of a major bend in the Missouri River (from which the dam takes its name), Big Bend Dam creates Lake Sharpe, named after South Dakota Governor Merrill Q. Sharpe. The lake extends for 80 miles (130 km) up the course of the Missouri River past Pierre to Oahe Dam, another major power-generating and flood control embankment. Lake Sharpe covers a total of 56,884 acres (23,020 ha) and drains an area just under 250,000 square miles (650,000 km2).

The construction of the dam in the 1960s resulted in the dislocation of people on the Crow Creek Reservation. The flooding also resulted in the loss of limited plant life resources used by these people for food and medicine.

A monument at Big Bend Dam dedicated in 2002, the Spirit of the Circle Monument, honors the more than 1,300 people who died over a three-year period in the 1860s at the Crow Creek Reservation near the present site of the dam.

All content from Kiddle encyclopedia articles (including the article images and facts) can be freely used under Attribution-ShareAlike license, unless stated otherwise. Cite this article:
Big Bend Dam Facts for Kids. Kiddle Encyclopedia.