Big Chiwaukum is a prominent 8,081-foot (2,463-metre) mountain summit located in Chelan County of Washington state. Big Chiwaukum is situated northeast of Frosty Pass, and within the Alpine Lakes Wilderness. Big Chiwaukum is the highest peak in the Chiwaukum Mountains, a subset of the Cascade Range. In the Wenatchee dialect, Chiwaukum means many little creeks running into one big one. Its nearest higher peak is Cashmere Mountain, 10.35 mi (16.66 km) to the south-southeast. Precipitation runoff from Big Chiwaukum drains into tributaries of the Wenatchee River. 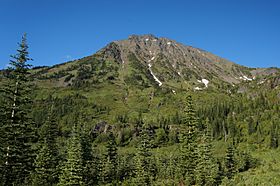 Big Chiwaukum is composed of schist, part of the Nason terrane laid down 210 million years ago. During the Pleistocene period dating back over two million years ago, glaciation advancing and retreating repeatedly scoured the landscape leaving deposits of rock debris. The last glacial retreat in the Alpine Lakes area began about 14,000 years ago and was north of the Canada–US border by 10,000 years ago. The "U"-shaped cross section of the river valleys are a result of that recent glaciation. Uplift and faulting in combination with glaciation have been the dominant processes which have created the tall peaks and deep valleys of the Alpine Lakes Wilderness area.

All content from Kiddle encyclopedia articles (including the article images and facts) can be freely used under Attribution-ShareAlike license, unless stated otherwise. Cite this article:
Big Chiwaukum Facts for Kids. Kiddle Encyclopedia.