Binley is a suburb in the east of Coventry, England. Binley evolved from a small mining village on the outskirts of Coventry to a large residential area composing private residences and council-owned properties.

Binley colliery started producing coal in 1911 and was most productive during the 1950s, the entrance was on Willenhall Lane. It closed in 1963 and Herald Way industrial estate now occupies the site. Former pit worker cottages still remain along Willenhall Lane and St James Lane.

Binley is flanked by Willenhall to one side (separated by the Coventry to Euston railway line), Stoke Aldermoor to another side (separated by Allard Way road), and Binley Woods on a third side, which almost joins Binley since the construction of the Eastern Bypass, a B&Q store and a T.G.I. Friday's restaurant between the two areas. The final side is Copsewood, leading to Wyken in one direction, and Stoke the other.

In the 1960s, a new housing estate called Ernesford Grange was built in Binley. Many of the new closes were named after miners who were well known in the community; William McKee, George Robertson, and Sam Gault being examples. Binley grew further in the 1990s with a large housing estate being constructed to the east of the old schools and extending to Brinklow Road (near to Coombe Country Park).

The flight path of the Coventry Airport in the nearby village Baginton runs just to the east of Binley. 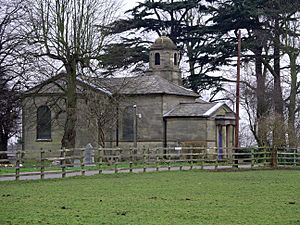 The construction of St Bartholomews Church was funded by Lord Craven. It was consecrated in 1772, with its 200th anniversary being celebrated in 1972. It has a grey slate roof, and its walls consist of light-coloured stone which appear grey after being coloured with a cement wash.

The local social club has been serving Binley locals since 1929. The club holds thousands of members. They have a local pool team / darts team / golf team / snooker team and two large venue rooms for hire.

All content from Kiddle encyclopedia articles (including the article images and facts) can be freely used under Attribution-ShareAlike license, unless stated otherwise. Cite this article:
Binley, Coventry Facts for Kids. Kiddle Encyclopedia.