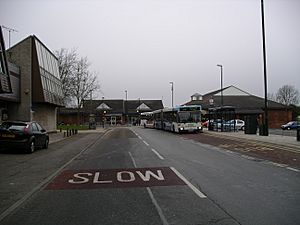 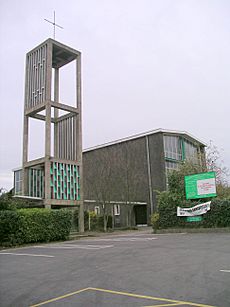 The parish church of St John the Divine

Willenhall is a suburb of Coventry in the West Midlands of England.

Willenhall is in the south-east of the city adjacent to the suburbs of Binley, Ernesford Grange and Whitley. It covers the area bounded by the Rugby to Coventry railway line, the River Sowe and the city's boundary with Warwickshire.

For general election purposes it is part of the Coventry South Constituency and for local elections it forms part of the Binley and Willenhall ward on Coventry City Council. The population of this ward at the 2011 census was 16,991.

Willenhall was originally a small village that was absorbed into the city as it expanded. During the Second world war the Chace National Service Hostel was built in the area to accommodate the influx of munitions workers to the City. After the war the estate became established with the building of a large number of council houses. The area today remains mainly residential though to the south-east there is 9 hectares of woodland called Willenhall Wood which has been designated a nature reserve.

Willenhall is the location of the Chace Avenue police station that forms part of the Coventry Local Policing Team of the West Midlands Police and houses the Binley and Willenhall neighbourhood team.

The Church of England parish church for Willenhall is St John the Divine which celebrated its 50th anniversary in 2007. The area is also served by St Anne’s Roman Catholic Church and Willenhall Free Church which is affiliated with the FIEC.

In May 1992, rioting which began in the Wood End and Hillfields areas of the city spread into Willenhall.

All content from Kiddle encyclopedia articles (including the article images and facts) can be freely used under Attribution-ShareAlike license, unless stated otherwise. Cite this article:
Willenhall, Coventry Facts for Kids. Kiddle Encyclopedia.