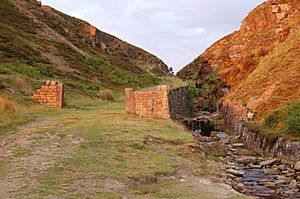 Black Brook in Lancashire has its source at Great Hill in the West Pennine Moors. The water is acidic due to a high level of peat in the uplands near to Round Loaf, giving the brook its brown colour. The young river was known as Warth Brook in olden Heapey. A feeder stream also known as Black Brook joins near Kittiwake Road - this short and weak water course commences at Eagle Tower. The jointed brook feeds Anglezarke Reservoir, and joins the River Yarrow in lowland Chorley at Yarrow Bridge. The entire course of Black Brook and the River Yarrow fall within Chorley and its villages.

After suffering many years of pollution due to effluent discharge from Whitter's Factory, and Stanley's Factory, the river is now much cleaner, and as such has attracted birds such as dipper, grey wagtail and kingfisher, and fish including trout, chub, dace and barbel.

All content from Kiddle encyclopedia articles (including the article images and facts) can be freely used under Attribution-ShareAlike license, unless stated otherwise. Cite this article:
Black Brook (Chorley) Facts for Kids. Kiddle Encyclopedia.