The Black Mountains are a mountain range located in the southeastern part of Inyo County, California, within southeastern Death Valley National Park.

The Black Mountains are a southern range of the Amargosa Range System and lie in a generally north-south direction at their southwestern end. Their formation has been classified as the Amargosa Chaos.

The range reaches an elevation of 6,384 feet (1,946 m) above sea level at Funeral Peak. Dante's View and Coffin Peak lie at the northern end of the range. The Amargosa Desert is 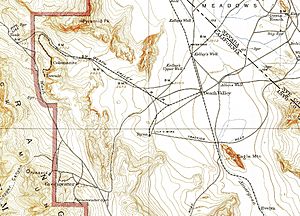 Death Valley Railroad from the Black Mountains to Amargosa Desert

The Lila C Mine, of "The Borax King" Francis Marion Smith and his Pacific Coast Borax Company, was developed to mine borax just east of the range. Around 1914 he built the Death Valley Railroad to primarily serve the newer Ryan C. Mine above it within the Black Mountains, with a spur to the Lila C. tracks.

All content from Kiddle encyclopedia articles (including the article images and facts) can be freely used under Attribution-ShareAlike license, unless stated otherwise. Cite this article:
Black Mountains (California) Facts for Kids. Kiddle Encyclopedia.