Blackbird Leys is a civil parish and ward in Oxford, England. According to the 2011 census, the population of the ward (whose boundaries may change occasionally so as to ensure minimal malapportionment) stood at 6,077. Unlike most parts of the City of Oxford, the area has a civil parish, which was created in 1990. In 2011 the population was recorded as 13,100.

There was a Bronze Age or Iron Age settlement on the site. Evidence has been found suggesting pits and roundhouses, with remains of pottery and a cylindrical loom weight of a kind previously known only from East Anglia. The area was originally called Blackford Leys; blackford after the dark-coloured ford which crossed the southern branch of Northfield Brook at the entrance to Blackbird Leys farm. The ford would be located where Windale Avenue crosses Northfield Brook. The farm was also called Blackford Leys farm. The Middle English leys meaning pasture or meadow. 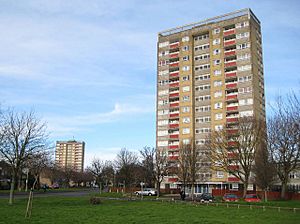 Evenlode Tower, with Windrush Tower in the background

Modern-day Blackbird Leys was built mainly in the 1950s and 1960s to meet the then pressing need for accommodation. It was part of a plan to re-house people from the dilapidated inner city. This included large-scale clearance of a site near to where the Oxford Ice Rink was built (The Oxpens). Many of the families that moved onto the estate originally came from this area. It was also a convenient site for factory workers at Morris Motors Limited plant in nearby Cowley. Greater Leys is sometimes applied to describe recent development adjacent and comprises mostly privately owned houses.

The area has traditionally been staunchly Labour. The Independent Working Class Association performed strongly in the mid-2000s, holding three of the four council seats on Oxford City Council between 2006 and 2008. Local MP Andrew Smith lives on the estate. His late wife Valerie Smith was also one of the City councillors and County Councillors for the area and a former Lord Mayor of Oxford.

Following a crackdown by police on joyriding in September 1991, some 150 youths stoned police officers. Two women suffered stab wounds and two men suffered other injuries during the riots.

Around this time, Blackbird Leys was infamous for its joy riding. Young men from the estate would steal cars and 'display' them (with a variety of high-speed stunts) to an audience gathered outside the estate shops (known locally as the 'top shops'), eventually gaining worldwide media attention. Politician Andrew Smith stated in 1991 that the extensive national media coverage of confrontations with the police in August and September left many of the wider public with a distorted picture of the problem. Some say journalists visiting helped encourage some of the action for filming. Various measures were brought in by the local council and police to stop the displays. Police often found it difficult to catch joy riders, whose stolen cars were faster than the police vehicles, though eventually a faster police car was introduced. Chicanes were built around the shops area, and an anti-skid surface applied to the road, making it difficult to execute handbrake turns and other stunts.

Crime levels have decreased consistently since 2004, a change thought to be due to a higher police presence on the estate though both recorded crime and rates found in the British Crime Survey have fallen across England and Wales. 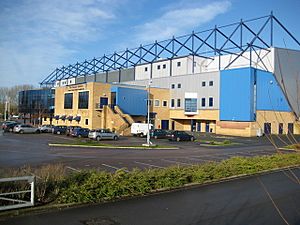 The Kassam Stadium is the home of Oxford United Football Club and is just within the greater boundary of Blackbird Leys in an area known as Minchery Farm. Initial construction begun in 1996 and the first football match took place on 4 August 2001.

In 2006, residents from the estate took part in The Singing Estate, a Channel Five reality TV show following their progress from amateur singers to classical choir. The Blackbird Leys Choir emerged from the original choir and continues today.

Blackbird Leys has no mainline railway station but is served by Oxford Bus Company and Stagecoach in Oxfordshire which provides bus services between Blackbird Leys, central Oxford and Oxford railway station. The freight-only railway between Kennington Junction and the BMW Mini factory via Iffley and Littlemore forms the northwestern boundary of Blackbird Leys. It is part of the former Wycombe Railway that British Railways closed to passenger traffic in 1963.

Blackbird Leys has two places of worship, The Church of the Holy Family which was dedicated on 10 April 1965 and Sacred Heart Catholic Church.

All content from Kiddle encyclopedia articles (including the article images and facts) can be freely used under Attribution-ShareAlike license, unless stated otherwise. Cite this article:
Blackbird Leys Facts for Kids. Kiddle Encyclopedia.