Oxford East is a constituency represented in the House of Commons of the UK Parliament by Andrew Smith of the Labour Party.

Until 1983, the whole of Oxford, including most of this seat, was part of the Oxford constituency. For the first four years, the constituency was served by Steven Norris, a Conservative; since his defeat at the hands of the current MP the seat has seen the Conservative share of the vote plummet to 18.8% in 2010. The seat has been since 2001 a Labour–Lib Dem marginal in terms of the majorities received by Labour's Andrew Smith.

The 1997 boundary changes moved two semi-rural Conservative-leaning wards out of the seat, and incorporated the urban Oxford South ward that was strong for the Liberal Democrats and Labour. 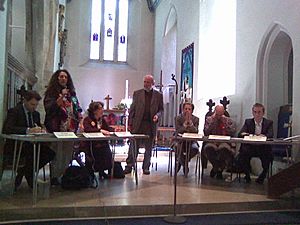 The constituency covers the eastern and southern parts of Oxford in Oxfordshire. It borders Oxford West and Abingdon to the West and Henley to the North, East and South.

The constituency includes Oxford city centre and the majority of the Oxford Colleges, Cowley (famous for its car factory) and the Blackbird Leys council estate, but there is a large percentage of student voters from both Oxford and Oxford Brookes Universities (the latter being based in the seat, in leafy suburban Headington).

Due to the high student and university-related vote, Smith came within a thousand votes of losing the seat to a Liberal Democrats at the 2005 election with such issues as the Iraq War and top-up fees losing many votes for the former Work and Pensions Secretary. At the end of 2010 unemployment claimant count was 2.3%, 45th of the 84 South East constituencies and close to the mean of 2.45%. 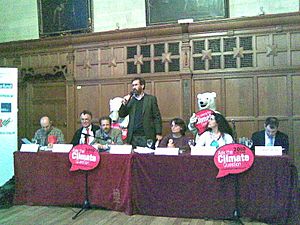 Oxford East candidates in the 2010 general election at a climate change hustings.

Parliament accepted the Boundary Commission's Fifth Periodic Review of Westminster constituencies which slightly altered this constituency for the General Election 2010. These changes added Carfax and Holywell wards from Oxford West and Abingdon. This means that Oxford city centre and the majority of Oxford Colleges now sit in Oxford East, whereas they had previously sat in Oxford West and Abingdon for the most part. It was expected that this would benefit the Liberal Democrats in this marginal constituency. However, in a shock result, when the seat was first contested on its new boundaries in 2010, the Labour incumbent Andrew Smith managed to quadruple his majority on various pro-Labour two-party swings defying the vast majority of those nationally. In 2008 on the constituency's previous boundaries Labour "won" 11 of the wards, Lib Dems 4, the Greens 3 and the Independent Working Class Association 1. 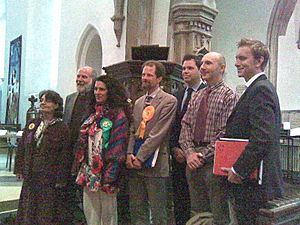 All content from Kiddle encyclopedia articles (including the article images and facts) can be freely used under Attribution-ShareAlike license, unless stated otherwise. Cite this article:
Oxford East (UK Parliament constituency) Facts for Kids. Kiddle Encyclopedia.