Blazing Dragons is the title of a Canadian-French animated television series created by Terry Jones and Gavin Scott, and produced by Nelvana and Ellipse Animation. A coinciding graphic adventure video game was released for the original PlayStation and Sega Saturn in 1996 by Crystal Dynamics. The video game features the voice talents of several celebrities.

The series' protagonists are anthropomorphic dragons who are beset by evil humans, reversing a common story convention. The series parodies that of the King Arthur Tales as well as the periods of the Middle Ages.

From 1996 to 1998, Blazing Dragons was produced by Nelvana in Canada and Ellipse Programme in France. In the series, King Allfire and his Knights of the Square Table fight against the evil Count Geoffrey and his inept minions. It ran for two seasons consisting of 26 episodes in total.

The cartoon episodes that ran in the United States, namely Toon Disney, were bowdlerised. Parts of episodes considered too overt, such as the implied homosexuality of an effeminate character named Sir Blaze, and minor swearing, were cut for the American release, as such matters were deemed taboo to American children's programming at the time.

Although the voice actors are of Canadian and American nationality in real life, they voiced some of the characters with British accents (mainly the dragons were given that aforementioned accent), while some characters such as Count Geoffery had Canadian accents, and Merle the Wizard has an American accent. 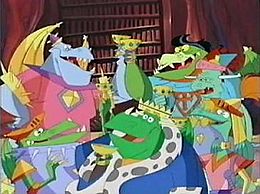 The series has gained a loyal fan following and several fan-written continuations of the series have been published online. Fan endeavours have differed in scale and scope, the "Brother Mine" series of novellas on wattpad being one notable example. Since July 2016, a new project called #BDRevolution or #BlazingDragonsRevolution appeared, consisting of making the fanbase grow through fanwork and converting new fans, bringing back old fans, convincing people who worked on the franchise (game and show) to support it, to convince Gavin Scott or Terry Jones to give the franchise a new chance, through any forms such as a new broadcasting, DVDs, a third season, a movie, a second game, or comic books, and so on. The project is slowly growing and was co-created by a fan and former story editor of season 2 Erika Strobel.

Currently the entire series is available for purchase (for streaming only) at Amazon. No DVD set is known to be produced as of June 2019.

All content from Kiddle encyclopedia articles (including the article images and facts) can be freely used under Attribution-ShareAlike license, unless stated otherwise. Cite this article:
Blazing Dragons Facts for Kids. Kiddle Encyclopedia.