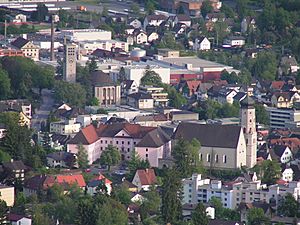 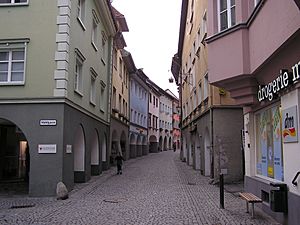 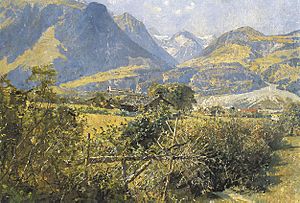 Bludenz, as it was seen by Jakob Jehly, around 1890

Bludenz is a city in Vorarlberg. Bludenz was first named in a document from 830. About 14,000 people live there. Archeological findings suggest that there was a settlement from the Bronze age, probably relating to the La Tène culture.

Today, Bludenz is an important railway hub, at the point where the Klostertal, Brandnertal and Montafon join. It is the start of the railway line that links Vorarlberg to Tyrol, over a mountain pass called Arlberg. In the year 1274, Bludenz was awarded city rights.

All content from Kiddle encyclopedia articles (including the article images and facts) can be freely used under Attribution-ShareAlike license, unless stated otherwise. Cite this article:
Bludenz Facts for Kids. Kiddle Encyclopedia.