Blue Licks Battlefield State Resort Park is a park located near Mount Olivet, Kentucky in Robertson and Nicholas counties. The park encompasses 148 acres (60 ha) and features a monument commemorating the August 19, 1782 Battle of Blue Licks. The battle was regarded as the final battle of the American Revolutionary War. 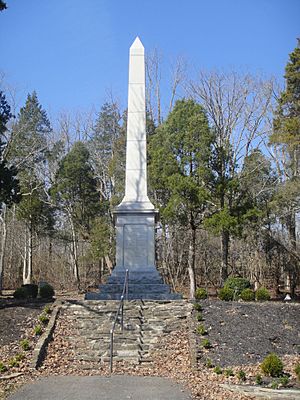 Monument at the Blue Licks Battlefield

The earliest accounts of Blue Licks describe it as a place where animals gathered to lick the salt deposits flowing from the springs in the area. The Reverend James Smith described it in his 1795–97 diary.

In 1782, British Captain William Caldwell led a force of Indians against the small Kentucky settlement of Bryan's Station. Caldwell met stiff resistance, and after two days, retreated toward the Ohio River. The pioneers – Daniel Boone among them – were inclined to wait for reinforcements before pursuing the enemy, and although under the general leadership of Major John Todd, Major Hugh McGary of the Lincoln County contingent made a brash and fateful decision to pursue immediately (after an insult for being timid from Todd), engaging Caldwell at Blue Licks. In the battle that followed, 60 of the 176 men who followed McGary were killed, Boone's son Israel among them. Another 7 were captured. The survivors fled back to Bryan's Station and Lexington. Reinforcements under [Benjamin Logan] eventually arrived and buried the dead militiamen.

By the mid-19th century, the Blue Licks area had become a health resort, due in large part to the nearby saltwater springs that had been used for "salt making" since the 1770s. The mineral water found in the springs was rumored to cure everything from asthma to gout. By 1896, however, the area's last spring had gone dry. Efforts to locate another spring unearthed several geological and historical artifacts. A more extensive excavation of the area was conducted in 1945.

The park is located along the Licking River, and offers canoeing and fishing. The Licking River Trail offers a one-mile (1.6 km) hike along the riverbank. Overnight stays are accommodated at the 32-room lodge or the 51-site campground.

The park also features a 15-acre (6.1 ha) nature preserve containing a cedar glade, managed by the Office of Kentucky Nature Preserves. This glade was previously maintained as an open area by the large numbers of herbivores, such as bison, elk, and woolly mammoths who frequented the area. Today much of the glade has transitioned into forest, but the remnant areas are being maintained by controlled burns and removal of Eastern redcedar. These remnants are home to the federally endangered Short's goldenrod and the state threatened Great Plains Ladies'-tresses.

The Pioneer Museum is the park's major attraction. It houses a variety of artifacts, from a mastodon tooth found during an excavation of the site to relics from the American Civil War. Exhibits focus on the area's natural and cultural history, including prehistoric animals and fossils, area Native Americans and 18th century pioneers, as well as a diorama of the battle. The museum was dedicated in 1931, saw renovations completed in 2007, and was closed for restoration as of 2014.

The Short's Goldenrod Festival—a celebration of one of the rarest plants in Kentucky and the United States—saw its 30th anniversary in 2006. It was held annually in the last week of September until 2008.

All content from Kiddle encyclopedia articles (including the article images and facts) can be freely used under Attribution-ShareAlike license, unless stated otherwise. Cite this article:
Blue Licks Battlefield State Resort Park Facts for Kids. Kiddle Encyclopedia.