The blue striped grunt (Haemulon sciurus), bluestriped grunt, red mouth grunt, or firemouth grunt, is a subtropical species of grunt native to the western Atlantic Ocean. It was described by the English naturalist George Shaw in 1803.

Its common name comes from its blue stripes and from its habit of grunting by grinding its pharyngeal teeth. The swim bladder, acting as a resonator, amplifies this sound.

The blue striped grunt is found in mangroves, seagrass beds, dropoffs and coral reefs at depths up to 30 meters. Its range includes the Western Atlantic, Florida, Gulf of Mexico, and the Caribbean down to Brazil. 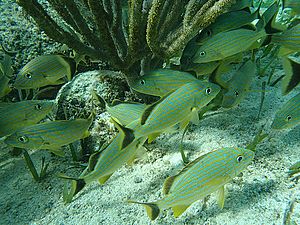 The fish travels in schools with the smaller French grunt (H. flavolineatum), a close relative. Up to 1,000 grunts can form a school. The schools generally cruise near coral.

The diet consists mainly of shrimp. It may also eat annelids, bivalves, and crustaceans.

Predators of the grunt are larger piscivorous fish, such as sharks.

The blue striped grunt is edible and quite good, like many other grunt species. However, it is one of the smaller grunt species, with an average length of 10". There have been reports of ciguatera poisoning from consumption of this fish. Due to the small size, and chances of carrying ciguatera, it is only of minor commercial importance. When it is available, it is marketed fresh. Recreational and commercial anglers typically use this fish for bait.

Blue striped grunts are also valued as a specimen for public aquariums due to their very attractive coloration.

All content from Kiddle encyclopedia articles (including the article images and facts) can be freely used under Attribution-ShareAlike license, unless stated otherwise. Cite this article:
Blue striped grunt Facts for Kids. Kiddle Encyclopedia.