Bombala is a town in the Monaro region of south-eastern New South Wales, Australia, in Snowy Monaro Regional Council. It is approximately 485 kilometres (301 mi) south of the state capital, Sydney, and 80 kilometres (50 mi) south of the town of Cooma. The name derives from an Aboriginal word meaning "Meeting of the waters". The town lies on the banks of the Bombala River. At the 2016 census, Bombala had a population of 1,387.

The Bombala area was inhabited by the Ngarigu Aboriginal people prior to the first European settlers arriving in the 1830s. Captain Ronald Campbell established a large property in 1833 that he named 'Bombalo'. More European settlers arrived in the Bombala area in the 1840s during which time the small township developed. Bombala had a post office by 1849 and had a number of large commercial and public buildings by the . mid 1850s.

Bombala was proposed in 1903 by King O'Malley as the site of the parliamentary seat of Australia. It was considered as a location because it was half way between the two cities of Sydney and Melbourne. The proposal was ultimately rejected in favour of Canberra.

The town lies on the banks of the Bombala River and principal industries of the area include grazing and timber. Tourism is also growing in importance to the local economy. There is also a small amount of specialty producers with meat rabbits, lavender and many herbs being grown in the district. Delegate is situated 36 km west of Bombala and The Snowy River March which commenced from Delegate in 1916 went via Bombala to Goulburn.

The timber industry has slowly begun to overtake many of the historic properties surrounding Bombala, such as the more-than-150-year-old property of Aston, 10 kilometres (6.2 mi) south-west of the township.

The area is known for possibly the largest population of Platypus in New South Wales and is promoted as Platypus Country.

The Holy Transfiguration Monastery is a male monastic community of the Russian Orthodox Church Abroad. Founded in 1982, the monastic community presided over by Abbott Hieromonk Sergius, abides in the pristine and rugged valley of the MacLaughlin River situated between Cooma and Bombala.

The Facebook page "Bombala History in Photos" contains a wealth of information about the town's history.(https://www.facebook.com/Bombala-History-in-Photos-1465567133467894/) 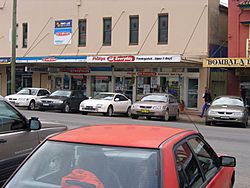 Situated at 705 metres above sea level on the eastern edge of the Monaro Tablelands, Bombala is known for its cold winters with frequent frost and occasional snow. Just a few kilometres to the east, the land slopes downwards to the South Coast, a flat coastal plain where summers are much hotter and winter temperatures are milder. Examples of this are towns such as Bega and Merimbula, both located about 80 kilometres east of Bombala, however their climates are vastly different to Bombala's. According to Koppen climate classification scheme, Bombala has a subtropical highland climate (Cfb).

Most rain in the area falls as either thunderstorms in summer, or with cold fronts in winter that are usually accompanied by cold temperatures, meaning that the rain often turns to snow once night falls. Extreme temperatures have ranged from 40.7 °C (105.6 °F) to −10.0 °C (14.0 °F).

The railway reached Bombala in 1921 and closed in 1986. being an extension of the line from Queanbeyan to Cooma. The line was and still is known as the Goulburn to Bombala line. During the 1970s, service was provided by a small rail bus, taking 4 hours to cover the 100 km (62 miles) between Cooma and Bombala.

The Monaro Highway (now route B23) which runs from Canberra to Cann River (Victoria) passes through Bombala. Other major roads include Mt Darragh Rd which connects to Pambula and Merimbula on the NSW South Coast.

The nearest airport with regular air services is at Merimbula, 85 km to the east.

The name Bombala is used as a name for a crater on the planet Mars, without specifically commemorating the town.

All content from Kiddle encyclopedia articles (including the article images and facts) can be freely used under Attribution-ShareAlike license, unless stated otherwise. Cite this article:
Bombala, New South Wales Facts for Kids. Kiddle Encyclopedia.