Boonville is a village in Oneida County, New York, United States. The population was 2,072 at the 2010 census. The village is named after Gerrit Boon, an agent of the Holland Land Company. 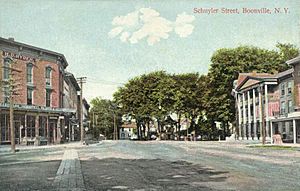 The first settlement, initiated by Gerrit Boon from Leiden, the Netherlands, was made in 1795. The village was incorporated in 1855. The original name of the community, provided by Boon, was "Kortenaer" (after Egbert Bartholomeusz Kortenaer, a Dutch admiral).

Andrew Edmunds was credited with being the founder of Boonville. Edmunds had arrived with Garrit Boon, who is believed to be the first to attempt permanent settlement in Boonville in the spring of 1795. Both men arrived together, constructed a sawmill on Mill Creek, only for it to be completely destroyed by fire when adding a gristmill. As winter approached, Boon and Edmunds relocated to Barneveld to return in the spring to rebuild the saw mills and welcome other settlers on behalf of the land company.

In the 1800s it is said to have been the most famous hotel between Erie Canal and the St. Lawrence River. The Hulbert House was originally build as a hotel and inn and had the same functions in current day. The Hulbert House welcomes travelers for breakfast, lunch, dinner or a relaxing overnight stay. While it has changed ownership throughout the years, the Hulbert House is still continuing its tradition which began over 180 years ago.

In the 1830s to the 1850s the Black River Canal was designed and constructed to connect the Erie Canal(Barge) to the Black River from Rome to Boonville - a distance of 25 miles. This section, connecting Rome and Boonville, is known as the Southern section of the overland canal. It’s constructed of 70 locks to lift the boats and water 693 feet. The Northern section of the overland canal connected Boonville and Lyons Falls, 10 miles in distance and requiring 39 locks to descend the boats and water 386 feet. In all, the Black River Canal had 109 locks and is still a world record.

The Black River Canal had a vital role in the livelihood of the North Countries growth and prosperity, giving it access to Eastern and Midwestern markets to help preserve, house, and display artifacts from the canal era. A museum was constructed. The museum is located on a site formerly occupied by Titus Powers Iron Works, built circa 1850 near the Main Street Bridge. Later this site became the Holdrige and Gilbert Foundry and Machine Shop.

In 1933, a significant clash occurred between the state police and farmers here.

In 1983, a tornado ripped through Boonville.

In 2004, Ethan Allen Interiors, a major employer in the village, closed down leaving many residents looking for work.

According to the United States Census Bureau, the village has a total area of 1.8 square miles (4.6 km²). None of the area is covered with water.

The geographic region is called the Tug Hill Plateau.

There were 877 households out of which 28.2% had children under the age of 18 living with them, 45.6% were married couples living together, 11.4% had a female householder with no husband present, and 38.7% were non-families. 33.8% of all households were made up of individuals and 18.0% had someone living alone who was 65 years of age or older. The average household size was 2.26 and the average family size was 2.86.

The NYS Woodsmen’s Field Days is held annually, rain or shine, on the third full weekend in August. This event includes forestry exhibits, fireworks, greased pole climb, lumberjack and lumberjill contest, woods craftsmen and it’s all kicked off with the Woodsmen’s Parade. Contestants travel from as far away as Canada, Australia, and New Zealand to compete in the Lumberjack festivals.

The Woodsmen’s Field Days is a nonprofit organization founded by Rev. Frank Reed in 1948, designed to cast light on the forestry industry in general. This field days has a variety of exhibits and demonstrations targeting both the professional logger and the average firewood cutter. With the help of many interested volunteers the field days has evolved into one of the leading lumberjack contest in the United States.

The Boonville Snow Festival held annually in late January consist of vintage snowmobile races, ice sculptures, parade, and fireworks. Local area businesses join in on the Festival of lights sponsored by the Boonville Chamber of Commerce.

Vendors, concessionaires and warming huts are available during the festival. It’s encouraged to wear a crazy or outrageous hat to show your spirit for the Boonville Snow Festival.

All content from Kiddle encyclopedia articles (including the article images and facts) can be freely used under Attribution-ShareAlike license, unless stated otherwise. Cite this article:
Boonville (village), New York Facts for Kids. Kiddle Encyclopedia.