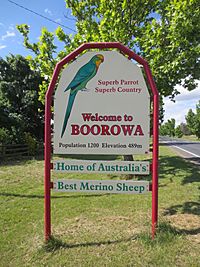 Road entry sign to Boorowa on the Lachlan Valley Way

Boorowa is a farming town in the South West Slopes of New South Wales, Australia. At the 2011 census, Boorowa had a population of 1,211 people. It is located in a valley 340 kilometres (210 mi) west of Sydney and 487 metres (1,598 ft) above sea-level. The town is in Hilltops Council local government area. 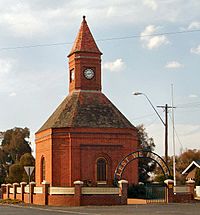 Prior to European settlement the area is thought to have been occupied by the Wiradjuri or Gandangara Indigenous Australians. It is believed that the name 'Burrowa', the original spelling, derives from the local aboriginal language and refers to a native bird the plains turkey.

The first European to travel through what is now Boorowa Shire was surveyor George Evans, in 1815. Unofficial occupation of the district began in 1821 with Irishmen Rodger Corcoran and Ned Ryan, both former convicts who had received their 'ticket of leave' from the Governor. The first land grant in the general area was issued to Thomas Icely in 1829. A mill was operating on the future town site of Boorowa by 1837, along with an inn and several houses.

Governor Gipps proposed the creation of a village named 'Burrowa' in 1842, to be located 9 km north-east of the present site at Kings Plains which had been surveyed in 1828. However, that spot proved unsuitable and the village was established on its present site in 1843. The early years in the district saw lawlessness and mayhem as a result of long running boundary disputes, theft of livestock and arson, even murders; the cause being remoteness and lack of law and order. Bushrangers roamed the surrounding unsettled wild mountainous land, making raids into the town and stations of the district.

Squatters took up large tracts of land in the Boorowa area but the introduction of the Robertson Land Acts in 1861 resulted in a new land grab where large numbers of settlers, particularly 'ticket of leave' men, applied for a 'selection' of land with low cost land parcels available.

The district was given over to farming, although it received a push along when gold was found at Carcoar, Browns Creek and Kings Plains. Gold mines were established although copper and iron were also extracted. Samuel Marsden's copper mine operated until 1900.

The town's rugby league team competed for the Maher Cup during the 20th century.

Boorowa residents and the local member of parliament lobbied the Government to direct the new southern main line progressing towards Goulburn to pass through the town but the towns of Yass and Murrumburrah won the debate. The next best option was a branch line to the town and this lobbying lasted 40 years before the line was eventually constructed, opening for traffic on 10 October 1914.

The arrival of the railway in 1874 spurred on development and Burrowa's name was then changed to "Boorowa". Boorowa replaced Carcoar as the major service centre to local farmlands. It became a municipality in 1888. By the turn of the century a butter factory and freezing works were major employers in the town. Passenger trains ceased in 1980 and the Boorowa railway line from Galong to Boorowa closed in 1987.

The main infrastructure achievements over the 180 years that connected Boorowa to the rest of the Colony included the first Post Office and mail service in 1835, the electric telegraph in 1866, voice telephone in 1906, electric street lighting in the 1920s by the towns own generator, later the town and consumers were connected to the Burrinjuck Hydro electricity system in 1938.

All content from Kiddle encyclopedia articles (including the article images and facts) can be freely used under Attribution-ShareAlike license, unless stated otherwise. Cite this article:
Boorowa Facts for Kids. Kiddle Encyclopedia.