Carcoar is a town in the Central West region of New South Wales, Australia, in Blayney Shire. In 2006, the town had a population of 218 people. It is situated just off the Mid-Western Highway 258 km west of Sydney and 52 km south-west of Bathurst and is 720 m above sea-level. It is located in a small green valley, with the township and buildings on both banks of the Belubula River.

Carcoar was once one of the most important government centres in Western New South Wales. The town has been classified by the National Trust due to the number of intact 19th-century buildings. Carcoar is a Gundungura word meaning either frog or kookaburra.

Nearby towns are Blayney, Millthorpe, Mandurama, Neville, Lyndhurst and Barry.

The original occupants were probably the Wiradjuri Aborigines. The first European to travel through the area was surveyor George Evans, who, heading south-west from Bathurst in 1815, set up his camp at the head of Coombing Creek.

The first settlers arrived in 1821. The first official land grant, comprising 560 acres (2.3 km²), was issued to Thomas Icely on 26 May 1829. He named it Coombing Park. In 1838 Thomas Icely requested that a village be established to service his large pastoral estate. On 29 September 1839 Carcoar became just the third settlement west of the Blue Mountains to be gazetted.

The first allotments in the town were sold in 1840. By 1850 Carcoar was the second most populous town west of the mountains, second in size only to Bathurst and became a banking and administrative centre for the area. In 1857 the town's public school opened. It has continued to function as a school since that day making it one of the oldest continuous schools in Australia.

The discovery of gold further to the west in the mid-1860s started the decline of the town. The government began erecting a number of significant public buildings starting in the late 1870s. At this time, Coombing Park was supplying iron ore to the Lithgow steelworks. 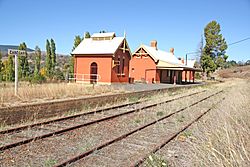 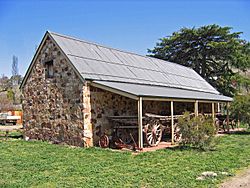 The Stoke Stable Museum, built by convict labour in 1849 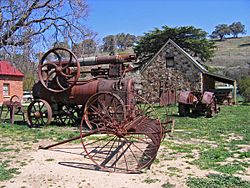 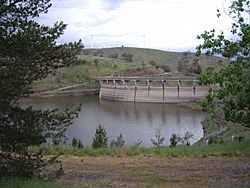 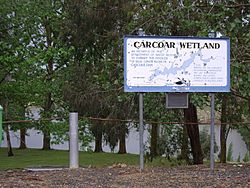 The location of the town in the bottom of a steep valley counted against it for railway construction. Another blow came to the town when the railway went to Blayney (13 km to the North West) in 1874. By the early 1880s the population was in decline. Carcoar was not on the rail line until 1888 when the Blayney–Demondrille railway line, which is an extension of the Main Southern Line, was constructed.

In the 1980s services were suspended between Cowra and Blayney (including Carcoar). This section was re-opened by the Lachlan Valley Railway. The LVR run tourist trains, mainly from Cowra to Blayney and Canowindra, and have now moved into general freight haulage.

Carcoar's population growth in the mid-19th century also brought forth problems with the local renegade convicts and bushrangers who frequented the area and indeed ventured into the town and its surroundings on quite frequent occasions. In the late 1830s renegade convicts and bushrangers were a problem around Carcoar. Martial law and the withdrawal of all convict privileges was threatened in 1841. However, with the capture of the bushranger Paddy Curran and the arrival of a magistrate and more police the trouble abated.

John Peisley, born in Bathurst in 1835, was a notorious horse thief in the area in the early 1850s while a teenager. He was eventually sentenced to serve time on Cockatoo Island near Sydney, now called Biloela, where he met Frank Gardiner, a prisoner who served time there and was labelled a ‘Cockatoo Hand’. In December 1860 Peisley gained his Ticket of Leave, conditional upon him remaining in the Hunter River Valley area. He absconded to the Abercrombie Ranges where his parents once lived and adopted the career of lone highway robber, ‘sticking up’ travellers in the area south and west of Bathurst. Peisley became one of the first true ‘Wild Colonial Boys’. After two months Frank Gardiner joined him and Johnny Gilbert made a gang of three, three weeks later. Peisley was captured late January 1862 and committed for trial by the Carcoar bench for murdering an innkeeper at Bigga. Two months later, he was convicted and hanged at Bathurst.

On 13 July 1863 Johnny Gilbert and John O'Meally led by Ben Hall held up the Commercial Bank at Carcoar. A brave teller in the bank fired a shot into the ceiling of the bank, thwarting the robbery. The manager was shot outside as he was returning to the bank and the gang fled without seizing anything. This was significant as it was Australia's first bank robbery, and in broad daylight. In October 1863 John Gilbert, Ben Hall, John O’Meally, and the two Mount Macquarie lads John Vane and Micky Burke, held up a jeweller’s shop and the Sportsman’s Arms Hotel in Bathurst in broad daylight. They exchanged shots with the police as they made their escape down George Street. They returned three days later to rob more stores, houses and hotels on the outskirts of the town. Weeks after Hall’s gang’s raids on Bathurst twenty-year-old Micky Burke’s very short bushranging career ended at Rockley.

Later still the Presbyterian Reverend James Adam was held up by Ben Hall who finding that the Reverend made a good impression upon him decided not to rob him.

Frank Gardiner, previously working in the area when he was granted a ticket of leave as a part of his parole conditions after a six-year stint for horse theft, broke his parole and took up cattle thieving.

Ben Hall was shot dead in a hail of gunfire near Forbes in May 1865 and was buried in the Forbes cemetery. In Ben Hall’s short three-year leadership the gang robbed ten mail coaches, held up towns and stations twenty-one times and stole twenty-three racehorses.

Carcoar was the site of Australia's first documented uranium deposit. The deposit was located within a cobalt mine, in the form of copper uranite ore.

The Royal Hotel Carcoar is an historic hotel steeped in old world charm and nestled in the quaint main street of Carcoar in NSW, a National Trust classified village. The Royal Hotel Carcoar has been awarded a coveted "Two Schooner" Good Pub Food Guide ranking in 2010 and 2011 which is the pub equivalent of the Australian Good Food Guide "Two Hat" rating for restaurants.

The first weekend in November sees the staging of the Carcoar Cup Running Festival. Begun in 2011, it has become an iconic event on the Australia Running calendar. Hosting an Ultra Marathon (60 km), Full Marathon (42.195), Teams Marathons (approx 10 km), Half Marathon (21 km), Carcoar Cup for Kids, and Carcoar to Creek Dash (6 km). Entrants run from Carcoar to Neville and back via Mount Macquarie and many also raise money for charity. Runners come from over 170 different towns and cities throughout Australia and overseas. The event has been recognised as NSW Regional Flagships Event for the last two years. The Festival also won an Australia Day award as Community Event of the Year. See more [1]

An annual agricultural show held on the last weekend of October with judged events ranging from flower arranging to stud cattle and heavy horse snigging and pulling competitions.

The annual festival for Australia Day swells the population of Carcoar to over 3000. The streets are lined with stalls. There are stage coach rides, entertainment, refreshments and historical reenactment of local history.

All content from Kiddle encyclopedia articles (including the article images and facts) can be freely used under Attribution-ShareAlike license, unless stated otherwise. Cite this article:
Carcoar, New South Wales Facts for Kids. Kiddle Encyclopedia.