Bottomless Lakes State Park is a state park in the U.S. state of New Mexico, located along the Pecos River, about 15 miles (24 km) southeast of Roswell. Established in 1933, it was the first state park in New Mexico. It takes its name from nine small, deep lakes located along the eastern escarpment of the Pecos River valley. The escarpment is an ancient limestone reef, similar to the limestone mountains around Carlsbad Caverns, 80 miles (130 km) to the south. Caves formed within the limestone, and as the Pecos River eroded the escarpment, the caves eventually collapsed, leaving behind several deep, almost circular lakes known as cenotes.

Most of the nine lakes are almost completely surrounded by cliffs, with the notable exceptions being Lea Lake and Lazy Lagoon. Lea Lake has a large, sandy shoreline on the western side and tall cliffs on the eastern side. The cliffs around Lazy Lagoon have been completely eroded away by the Pecos River, and the lake sits in a former channel of the river.

Lazy Lagoon is the largest of the lakes, with a surface area of approximately 26.1 acres (10.6 ha). Although it is a single lake, it is made up of three separate sinkholes. The surface of the Lazy Lagoon is nearly level with the surrounding salt flats, which makes it look very shallow. Despite the name, the deepest of its three sinkholes is 90 feet (27 m) deep.

Lea Lake is the only lake in which swimming is allowed. It has a beach and concession area that is popular in the summer.

Devil's Inkwell is the smallest lake with a surface area of 0.36 acres (0.15 ha). Its name stems from the water's dark color, caused by the steep sides of the cenote and algae growth within the lake.

In pure geologic terms, Figure Eight Lake is two lakes separated by a thin strip of land. When the water is very high the strip of land is covered, and the two nearly circular lakes join and take the shape of a figure eight. Irrigation in the Pecos Valley has lowered the water table, so the two lakes of Figure Eight lake rarely join to form a single lake anymore.

Seven of the lakes are protected, although in recent years the lakes have been contaminated by trash that has been thrown into the lakes by careless visitors. The ninth and southernmost lake, Dimmitt Lake, is not a part of the state park and is owned by the Fin and Feather Club, a local hunting and fishing club.

Four endangered species can be found in the park—the Pecos pupfish, the Rainwater Killifish, the cricket frog, and the Eastern Barking Frog.

In the winter, Devil's Inkwell and Cottonwood Lake are both stocked with Rainbow Trout. 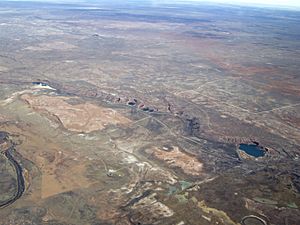 An aerial view of the Bottomless Lakes State Park near Roswell, New Mexico

All content from Kiddle encyclopedia articles (including the article images and facts) can be freely used under Attribution-ShareAlike license, unless stated otherwise. Cite this article:
Bottomless Lakes State Park Facts for Kids. Kiddle Encyclopedia.